While the world focuses on whether Palestinians and Israelis are or are not talking at the peace table, the realties on the ground continue unabated.  Illegal settlements keep growing, while Palestinian homes continue to be demolished and populations endangered and forced off their land. 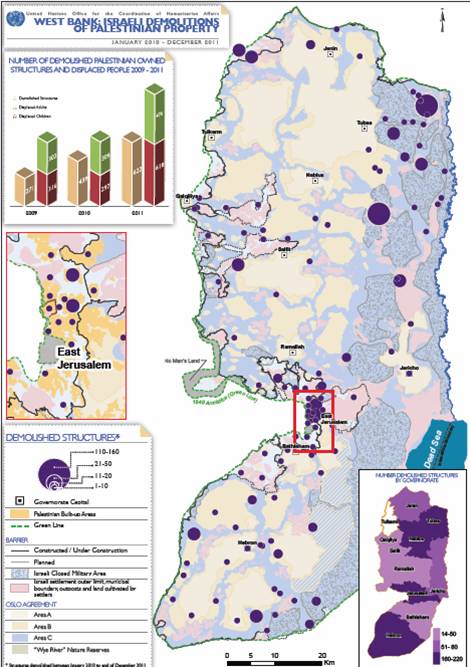 Note Areas A, B and C and the demolition numbers on the top left chart. From OCHAOPT. org

According to a new report by the United Nations Office for the Coordination of Humanitarian Affairs in the occupied Palestinian territory, the demolitions occuring in Area C, as well as other Israeli practices favoring expanding settlements, “have resulted in fragmentation of land and shrinking space for Palestinians, undermining their presence.  Israeli authorities have also indicated that they intend to transfer several Palestinian communities out of strategic parts of Area C, raising further humanitarian and legal concerns.”

The report finds that “it is almost impossible for Palestinians to obtain permits (to build).  The zoning and planning regime enforced by Israel in Area C and East Jerusalem restricts Palestinian growth and development, while providing preferential treatment for unlawful Israeli settlements.  They find that “70% of Area C is “off-limits” for Palestinian construction, allocated instead for Israeli settlements or the Israeli military; and additional 29% is heavily restricted.”

During the Oslo process, the occupied Palestinian territory was divided in Areas A, B and C.  Area A was under Palestinian control (although Israeli incursions still occur there); Area B, which was under Israeli administrative control and Area C, which was under Israeli control.  All areas, however, are part of the occupied Palestinian territory, and it is illegal under international law for Israel to transfer its population onto the territory or remove the local people living there.