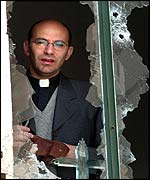 The Rev. Dr. Mitri Raheb, pastor of Bethlehem’s Christmas Lutheran Church of the Evangelical Lutheran Church in Jordan and the Holy Land (ELCJHL),  received the 2011 “Deutscher Medienpreis” (German Media Prize) to recognize his individual and the Palestinian Lutheran church’s peace efforts. Pastor Raheb is also Director of DIYAR Consortium, which operates an international cultural center, a health and wellness center and a college. He is among four recipients of the prestigious prize to be awarded in Baden-Baden, Germany.

In his speech receiving the award, Pastor Raheb said:

We said, firstly, that the Holy land does not need walls but bridges. That is why we called our centre “Dar annadwa”, Centre for International Encounter. Martin Buber, the Jewish philosopher, whose thinking is very significant for me, was right when he wrote, “All true life is encounter.” The “thou” of the other person gets a face and a name through encounter. Dialogue can only be true dialogue if it is a dialogue between people with equal rights, if the “thou” and the “I” stand face to face. If each person can have their narrative, their history and identity, but also listen to the narratives of the others. A monopoly of truth, of certainty or the role of the victim are not part of genuine dialogue.

Then we said we must not just become peace chatterers. In a context where so many destructive factors are created every day and, at the same time, there is constant talk about peace processes, we must work continuously to create spaces for life: spaces where people can breathe, where children in refugee camps can make music; where women from distant villages can learn a profession in artistic handwork; where Christian and Muslim children attend school together, where young men who cannot find jobs on the labour market receive further training; where people in leadership receive political education; where young Palestinian women play football and compete at the world level, where senior citizens can lead a life in fullness and where Jewish and Palestinian academics and activists together seek a better future. What we put into practice with them is the belief that the sky and not the wall should be the limit of our thinking and creativity. That may sound good but in our region (and not only there) it is very dangerous. It is dangerous to think; demands for freedom of opinion are not welcome and challenging myths frequently costs one one’s life. But life is only genuine if it is lived in freedom.

Pastor Raheb is known world-wide for his peace and creativity work with media, education and culture.  Find out how you can help with Raheb’s work for children at Bright Stars of Bethlehem.org.

“The Deutscher Medienpreis is a recognition of not only your hard work and passion for justice, it is an affirmation of your approach, and that of the ELCJHL, to the complicated challenges of building institutions that change lives and of building relationships that strengthen prospects for a lasting peace.  Your efforts exemplify the ELCJHL’s nonviolent opposition to the Occupation, its uncompromising commitment to finding peaceful solutions, and its rigorous promotion of tolerance and mutual respect among Jews, Christians and Muslims, and between Palestinians and Israelis.”

To mark the 20th anniversary of the prize this year, it honors individuals who, in their work for peace, have quietly carried on without much media attention. The Deutscher Medienpreis jury said Raheb was being honored for building the Bethlehem congregation’s education, health care and dialogue programs.