Obama: “Israel doesn’t know what its best interests are” 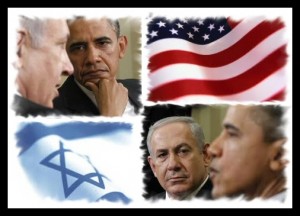 Following the UN vote to upgrade Palestine’s status to non-member state last fall, Israeli Prime Minister Benjamin Netanyahu announced Israel’s intent to develop E-1, a crucial area between Jerusalem and Jericho that is Palestinian land and would, if developed into Israeli settlements, virtually cut the West Bank into northern and southern enclaves.  Netanyahu also announced the building of 3000 new illegal settlement units in the West Bank, including East Jerusalem.

According to American  journalist Jeffrey Goldberg,  “In the weeks after the UN vote, Obama said privately and repeatedly, ‘Israel doesn’t know what its own best interests are.’  With each new settlement announcement, in Obama’s view, Netanyahu is moving his country down a path toward near-total isolation.”