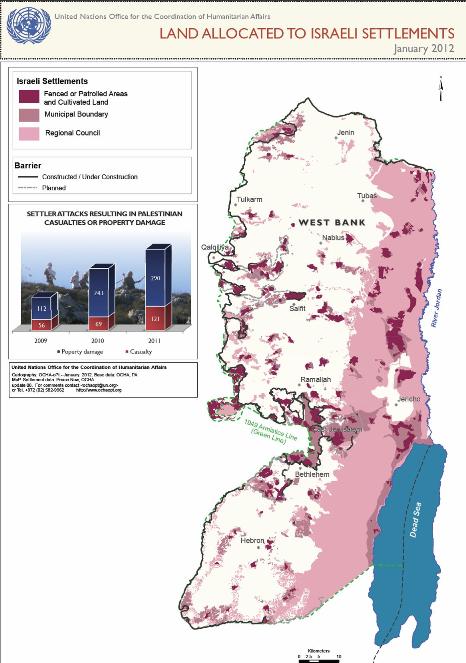 The rate of growth for illegal settlers in the West Bank is growing at a faster pace than growth within Israel itself, according to a January, 2012, report by the UN Office for the Coordination of Humanitarian Affairs for the occupied Palestinian Territory (OCHA).   While the fenced or developed areas of settlements cover only 3% of the West Bank, 43% of the West Bank is off-limits to Palestinian use because it is allocated for settlements and their growth.  About one third of the land reserved for settlement growth is privately owned by Palestinians, the report said.

In addition, five Palestinians were killed (including 2 children) and over 1000 injured (one-fifth of whom were children) by Israeli settlers or soldiers in incidents related to the settlements.

While the Israeli rationale for the wall is always given as security, this report concludes that “the location of the settlements was “the major consideration behind the deviation of the Barrier’s route away from the Green Line; once complete, about 80% of the settler population wil live in settlements located on the “Israeli” side of the Barrier.”

Settlements are illegal under international law as they violate Article 49 of the Fourth Geneva Convention, which prohibits the transfer of the occupying power’s civilian population into occupied territory.  This illegality has been confirmed by the International Court of Justice, the High Contracting Parties to the Fourth Geneva Convention and the United Nations Security Council.  Some in Israel justify settlements because they say it is “disputed” land and not occupied.    Read full report.