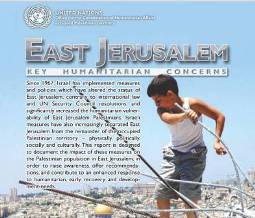 A new report by the UN Office for the Coordination of Humanitarian Affairs for the Occupied Palestinian Territories says that unless current Israeli policies are changed, the Palestinian presence in East Jerusalem is at risk.   See the Peace not Walls Major Issue page on Jerusalem for more information, and the Evangelical Lutheran Church in Jordan and the Holy Land’s website for information about our longtime companion church there.
The report gives background, current statistics and case studies about residency rights; planning, zoning and home demolitions; settlements; the separation barrier and restrictions on education and health care.
Citing the Jerusalem Master Plan of 2000 and related policies designed to maintain a Jewish majority in Jerusalem, the report blames the current Palestinian housing shortage on Israeli policies like reserving only 13% of the land for Palestinian building, most of which is already built up, home demolitions, settlement expansion and the new open spaces plan. 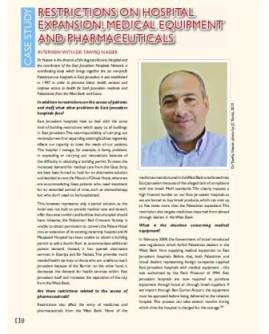 Dr. Tawfik Nasser, CEO of Augusta Victoria, explains the difficulties of running a hospital in East Jerusalem in a new UN report.

According to the report,  the Palestinian population is also being thinned by the revocation of Jerusalem IDs, the freezing  of family reunification permits and outright evictions is also detailed.  Problems with the separation barrier, access to education and health care are also explored.  One case study in the report features the LWF’s Augusta Victoria Hospital’s CEO Dr. Tawfik Nasser  discussing the difficulty in expanding hospital space and obtaining pharmaceuticals, medical equipment and necessary permits for EMTs.

Augusta Victoria Hospital has been serving refugees and all who need health care since 1949, and is one of six major health institutions in East Jerusalem.  The Lutheran World Federation’s Jerusalem program, which runs the hospital as well as other programs, also has a housing project underway, the Mt. of Olives Housing Project,  to address the critical housing shortage for Palestinians and help keep a Palestinian presence in Jerusalem.

Another case study in the report features the the Kasabrehs.  Ghassan, the organist at Redeemer Lutheran Congregation, has a Jerusalem ID, but his wife, Rimaz, is from Nablus and only has a West Bank ID.  They have been told that the yearly permit they have been issued – a timely and sometimes costly process – will not be issued anymore as of now, so she will be illegal in her own home when her current permit runs out.  The Kasabrehs were featured on an ELCA video entitled The Forbidden Family.