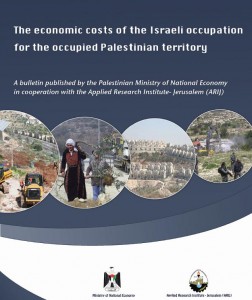 According to a September, 2011, report by the Palestinian Ministry of National Economy in cooperation with the Applied Research Institute – Jerusalem (ARIJ), the Palestinian economy would be about twice what it is now were it not for occupation policies including restrictions on Palestinians using their own resources, movement restrictions, damages to infrastructure and agriculture and other factors. From the The Economic Costs of the Israeli Occupation on the Occupied Palestinian Territory:

Today these restrictions have deepened further and according to our estimations in 2010 they are almost equal to the value of the entire Palestinian economy. The total costs imposed by the Israeli occupation on the Palestinian economy which we have been able to measure was USD 6.897 billion in 2010, a staggering 84.9% of the total estimated Palestinian GDP.

In other words, had the Palestinians not been subject to the Israeli occupation, their economy would have been almost double in size than it is today.  Table E1 below summarises these costs split by the main types of restriction. In line with the colonial paradigm of the Israeli occupation, the majority of these costs do not have any relationship with security concerns but rather come from the heavy restrictions imposed on the Palestinians in the access to their own natural resources, many of which are exploited by Israel itself, including water, minerals, salts, stones and land. Over USD 4.5 billion per year, a full 56% of GDP, is the cost (in terms of both foregone revenues and higher costs of raw materials) for the Palestinians for not being able to access their own resources.