Levy Report says settlements legal and there is no occupation 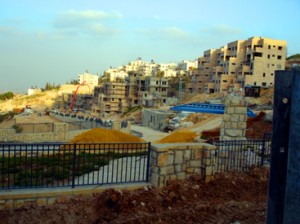 Nof Zion, one of the most recent settlements in East Jerusalem, is now considered illegal under international law. The Levy report contradicts this.

The recently-released Levy report commissioned by Israeli Prime Minister Bejamin Netanyahu’s office has concluded that not only are all outposts legal, but all settlement activity in the West Bank is legal.  The report went on to reject the claim that Israel’s presence in the West Bank is one of an occupying force.  Settler communities hailed the report, others condemned it, as it contradicts many UN resolutions, Israeli supreme court decisions and the Fourth Geneva convention.

The US issued a statement criticizing the report and said it continues to oppose Israeli settlement activity in the West Bank.  Meanwhile, the UN Human Rights Council continues to plan to look into the Israeli settlement question and Israel’s Foreign Ministry says it won’t cooperate with the initiative.  On the question of whether the West Bank is occupied territory, international legal expert  Prof. David Kretzmer, said, “If Israel is not an occupying force, it must immediately relinquish ownership of all private lands seized over the years for military use, taken with authority as the occupying force in an occupied territory, and restore the lands to previous owners,” said Kretzmer.