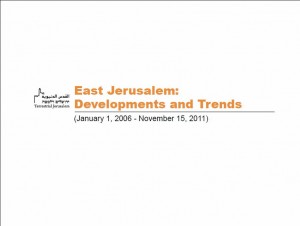 A new report from Terrestrial Jerusalem shows the increase in settlement activity in and around Jerusalem.  Currently, there are pending plans for the construction of approximately 8000 new units, and, in addition, approximately 11,000 units in the pre-statutory stage.  This, combined with the increasing number of home demolitions and Palestinians displaced by them, are affecting Jerusalem’s final status, in contradiction to the Oslo agreements.

Read an analysis by Americans for Peace Now about settlement construction, and an official Israeli government view on settlements.

Listen to an audio tour from the Israeli Committee Against Home Demolitions using a map of the Old City of Jerusalem to understand the history, process and effects of home demolitions there.