Israel controls 94% of the Jordan Valley, a potential breadbasket for a Palestinian state, new report says 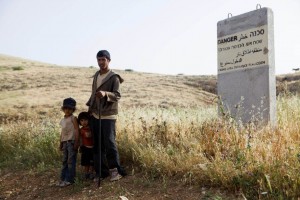 A Palestinian family in the Jordan Valley cannot access their land due to Israeli restrictions on it.

Republican Presidential hopeful Mitt Romney has toured Israel and raised controversy in several arenas.  First, he said he would move the US Embassy to Jerusalem, a controversial move that others in the international community have not done.  Then he compared the Israeli economy to the Palestinian economy, implying that a superior Israeli culture accounted for the better Israeli economy.  Read a New York Times editorial about Mr. Romney’s visit.

Meanwhile, more and more sources are pointing out how much the Palestinian economy is decimated by the Israeli occupation of its land and resources.  In a new report, On the Brink: Israeli Settlements and their Impact on the Jordan Valley, Oxfam points out that the Jordan Valley, which could be a potential breadbasket for the Palestinian economy, is actually almost totally controlled (94%) by the Israeli government, settlements and infrastructure.  From the report:

The Jordan Valley, located in the eastern part of the Occupied Palestinian Territory (OPT), makes up 30 per cent of the West Bank (see Map 1 on page 7). Requisitions and expropriations of Palestinian land by the Israeli authorities continue to destroy the livelihoods of Palestinians living in the area and, unless action is taken, there are strong indications that the situation will only get worse. The Israeli government recently announced proposals and policies for the expansion of settlements, which, if implemented, will further threaten the living conditions and human rights of Palestinian communities in the Jordan Valley, undermining efforts to bring peace and prosperity to the OPT and Israel.

UNEQUAL ACCESS
Only 6 per cent of the land in the Jordan Valley is currently available for Palestinian use and development.1 While the Israeli settlements there have developed modernised agribusinesses that produce crops for high-value export to the European Union (EU) and international markets, Palestinian farmers – most of whom are smallholders – face restrictions that severely hamper their ability to sell their produce locally, regionally, or internationally.

Development is further constrained because Palestinian families and businesses, and even EU donors and aid agencies, find it nearly impossible to gain permits to build homes, toilets, wells, animal pens, or other vital infrastructure for local communities. Less than 1 per cent of „Area C‟ (the 60 percent of the West Bank under exclusive Israeli control where nearly all of the Jordan Valley is located) has been planned for Palestinian development2 by the Israeli Civil Administration,3 and 94 per cent of permits have been rejected in recent years.4 Essential structures built without development plans and hard-to-obtain permits are frequently demolished in contravention of international law.

It is estimated that if Israeli restrictions on Palestinian development were removed, an additional 50 sq/km of the Jordan Valley could be cultivated, potentially adding $1bn a year to the Palestinian economy, or 9 per cent of gross domestic product (GDP).5

Read full Oxfam report:  ON THE BRINK: Israeli settlements and their impact on Palestinians in the Jordan Valley.

Mailing List
Subscribe
Palestinian and US Youth team up at the Wall at the 2012 ELCA Youth Gathering | African Americans for Justice in the Middle East and North Africa releases statement: “Silence in the face of injustice and oppression is unacceptable”