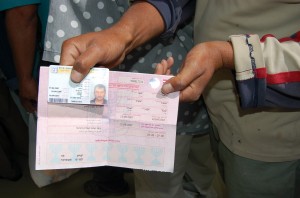 One of the many kinds of permits that people in the West Bank need in order to travel into East Jerusalem or Israel.

The Central Bureau of Statistics in Israel says the West Bank’s Palestinian population amounted to 1.05 million in 1994, which means the population would have been greater by about 14 percent if it weren’t for the procedure.

Today, a similar procedure is still in place for residents of East Jerusalem who hold Israeli ID cards; they lose their right to return if they have been abroad for seven years.  (See previous post on “The Bookseller of Jerusalem.“)

This policy should not only be seen as a war crime as it is under international law; it also has a humanitarian dimension: we are talking about people who left Palestine to study or work temporarily but who could not return to resume their lives in their country with their families.  Israel’s actions violate the Universal Declaration of Human Rights which states that ‘everyone has the right to leave any country, including his own, and to return to his country.’