ELCA Blogs / Peace Not Walls / Inequality between Palestinians and Israelis

Inequality between Palestinians and Israelis

While the peace process remains stymied, and all focus is on whether parties will return to talks or not, suffering does not stand still in the Holy Land, especially for those in the occupied Palestinian territories dealing with discrimination and inequities.

A recent report by the United Nations Office for the Coordination of Humanitarian Affairs in the occupied Palestinians territory (UNOCHA) makes this conclusion:

Israeli civil law is de facto applied to all settlers and settlements across the occupied West Bank, while Israeli military law is applied to Palestinians, except in East Jerusalem, which was officially annexed to Israel (which hasn’t been recognized under international law). As a result, two separate legal systems and sets of rights are applied by the same authority in the same area, depending on the national origin of the persons, discriminating against Palestinians.

These separate systems are the basis of many inequalities: 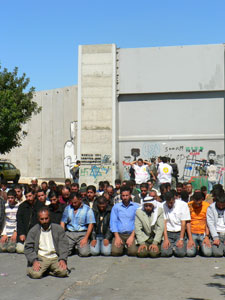 Though all are supposed to have access to Jerusalem's holy sites, Muslims are regularly prevented from going to pray at the Al Aqsa Mosque in Jerusalem. Here they pray at the checkpoint instead.

THE RIGHT TO FREEDOM OF MOVEMENT

ROADS AND PERMIT SYSTEMS:
In the West Bank, normal life for Palestinians is virtually impossible because of separate roads for Israelis and Palestinians; check points and roadblocks that impede Palestinian travel while facilitating that of Israelis[1]; and a bureaucratic permit system that allows Palestinians very limited movement even within the West Bank without a permit.

EAST JERUSALEM
East Jerusalem is home to about 270,000 Palestinians.  In addition, 200,000 Israelis live in ever-expanding East Jerusalem settlements.  Palestinian homes are demolished, residents are evicted, and land is threatened with confiscation for projects such as public parks.  A permit regime keeps Palestinians from moving freely in and out of the city.  The barrier restricts entry to Jerusalem for West Bank Palestinians while Israeli settlers can come and go freely.

THE RIGHT TO SECURE HOUSING
HOME DEMOLITIONS
Palestinian homes and other buildings have been demolished at an alarming rate to make room for settlers. West Bank residential demolitions were up 80% in 2011 over 2010, causing 1,100 Palestinians to be forcibly displaced from their homes with 4,200 more affected by the demolition of “livelihood structures.”

Elaborating on these statistics, the UN Office for the Coordination of Humanitarian Affairs notes, “These demolitions occur in the context of an inadequate and discriminatory planning regime that restricts Palestinian development, while providing preferential treatment to Israeli settlements.”[2]

THE RIGHT TO CHOOSE ONE’S OWN FAMILY
In the West Bank and Israel, Israeli laws deny the right of people to choose their own spouse and live with him/her.  Within the West Bank, family reunification permits have been frozen for years, which means a Palestinian with a Jerusalem ID cannot legally live with a West Bank spouse in Jerusalem without special dispensation.  Within Israel, a law was recently upheld which disallows a spouse from the West Bank to live with his or her partner in Israel.

THE RIGHT TO CONTROL AND BENEFIT FROM ONE’S OWN RESOURCES
Land inequities lead to unequal distribution of other natural resources, water in particular.  80% of the water from the West Bank mountain aquifer, which Israel controls, goes to Israelis – including setters – leaving only 20% for Palestinians.[4]  Israelis consume four times more water than West Bank Palestinians, 300 liters/day compared to 70 liters/day, according to a report by Amnesty International.[5].

The Palestinians are also denied the benefit of other resources that by law should be theirs to control, such as the quarries that Israel operates in theWest Bank that recently were allowed to continue. 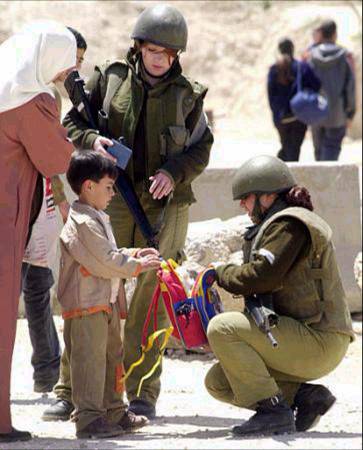 Soldiers check a child's backpack on the way to school.

THE RIGHT TO EDUCATION
In Gaza, high school students are often unable to leave the territory for university opportunities, while their Israeli counterparts in Sderot experience no such limitations.

The shortage of classrooms in Jerusalem for Palestinians is notorious, making for extremely crowded conditions.  Many students are hindered or prohibited from entering their schools on a daily basis by the checkpoint system or the barrier.  In Hebron, school children must be walked to school by international peaceworkers to protect them from settler violence.

THE RIGHT OF PEOPLE TO RETURN HOME
Palestinian refugees are not allowed to return to their homes while Jews from anywhere in the world are free to immigrate to Israel.  Many Palestinians who have passports from other countries have had their residency rights revoked and are being issued entry permits only for the West Bank and have trouble entering Jerusalem.

[1]   “More than 500 internal checkpoints, roadblocks and other physical obstacles impede Palestinian movement inside the West Bank, including access of children to schools; they exist primarily to protect settlers and facilitate their movement, including to and fromIsrael.”  “The Humanitarian Impact of Israeli Settlement Policies,” January 2012, UN OCHA oPt.