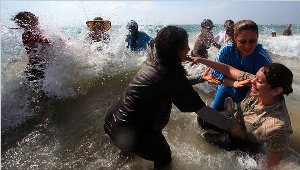 Palestinian women swim in the Mediterranean in Tel Aviv, some for the first time, with the help of Israeli friends who faced possible consequences for aiding the Palestinians in getting there. Photo by the New York Times.

Holy Land watchers can take heart that in a season of ineffective diplomatic results, Israeli and Palestinian civilians are finding ways to engage each other through the arts, education and simple recreation.

When the ELCA bishops traveled to the region in January 2009, they were encouraged to read Sandy Tolan’s The Lemon Tree. Now Tolan has reported on the process of bringing Picasso’s ‘Buste de Femme’ from a Dutch museum to the West Bank city of Ramallah. Says Tolan, “It seemed a ridiculous and impossible idea: Bringing a US $7.1 million Picasso into occupied Palestine.” He concludes, “The lesson of Picasso in Palestine? AbdulKarim says it is simple: ‘There are possibilities in impossibilities.'” Read more about how Israelis and Palestinians together overcame the physical and symbolic roadblocks.

Meanwhile, in the northern Israeli city of Haifa, Jewish, Arab, and international musicians collaborate in the Masada Street Artist Community. See a video featuring resident Afro-American musician Hazakyah. In the words of July 2011 street festival director Michal Rosenbaum: “Masada Street is a promising intersection of cross-cultural interaction and cooperation; an established hub for multicultural art, music, and social justice activism. It is intentionally open, inclusive and progressive. It’s a special place where Israel’s ‘mosaic of different religions, cultures and social traditions’ mix easily together in both work and play as a part of the daily routine.” Read more

Just this week, the New York Times reported that a dozen Israeli women “risked criminal prosecution” to take a group of Palestinian from the landlocked southern West Bank to visit the beach at Tel Aviv. Many of these Palestinians had never seen the Mediterranean. Observes author Ethan Bronner, In the grinding rut of Israeli-Palestinian relations — no negotiations, mutual recriminations, growing distance and dehumanization — the illicit trip was a rare event that joined the simplest of pleasures with the most complex of politics. It showed why coexistence here is hard, but also why there are, on both sides, people who refuse to give up on it.

Each year more than 25,000 high school students on both sides of the Green Line encounter each other in the Dialogue Meetings sponsored by the Parents Circle Family Forum.

This group is comprised of equal numbers of Israelis and Palestinians who have all lost family members to ongoing conflict and violence. After hearing the joint testimony of an Israeli and a Palestinian member of the group, one Israeli student wrote, “This was a fascinating encounter. I never had a dialog or met a Palestinian in the past. It was an eye opening experience which gave me a different perspective. I discovered things which I never believed happen on the other side and also their willingness to reconcile. This gave me so much hope and caused me to look at things differently.” Read more

Such people-to-people efforts may not replace the need for forceful and savvy advocacy toward the goals of ending the occupation, birthing a Palestinian state, and giving Israelis secure and normalized relations with their Arab neighbors. But these formal and informal programs do contribute to human flourishing in concrete and meaningful ways that can and should continue after those political aims are attained.
Carol Schersten LaHurd