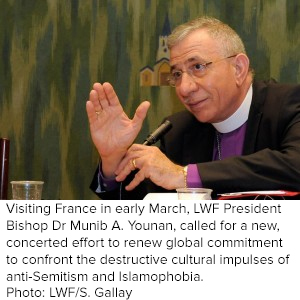 The Lutheran World Federation (LWF) President Bishop Dr Munib A. Younan, has warned while on a visit to France that globalized conflict is increasing Islamophobia and anti-Semitism and threatening civil liberties in Europe and North America.

“If we are seeing a self-fulfilling prophecy of clashing civilizations, extremisms of all sorts are strengthened as identities become more polarized,” said Younan, a Palestinian who heads the Evangelical Lutheran Church in Jordan and the Holy Land.

He spoke on 4 March at the Paris headquarters of the Protestant Federation of France (FPF), during a meeting the FPF organized in association with the Friends of Sabeel France, which supports the Sabeel ecumenical liberation theology center in Jerusalem.

He called for a new, concerted effort to renew global commitment to confront the destructive cultural impulses of anti-Semitism and Islamophobia, which “are two sides of the same coin.”

The Holy Land bishop said he was convinced that faith institutions, including churches, have a responsibility to strengthen political and religious moderates throughout the world, as the clearest way to diminish the appeal of extremism. “This is not a wishy-washy moderation; it is instead a robust moderation that claims the mandate of faith and defends the wellbeing of all people, not only Christians.”