Today, the Israeli government announced that another 942 housing units had been approved for construction in Gilo, one of the largest illegal Israeli settlements in the West Bank. According to several newspapers, including Ha’aretz and the New York Times, the plan was approved by the Jerusalem Planning and Building Committee on Monday, April 4. Normally, follow-up votes can occur months after the committee approval; in this case, the vote has been scheduled for the next Tuesday. 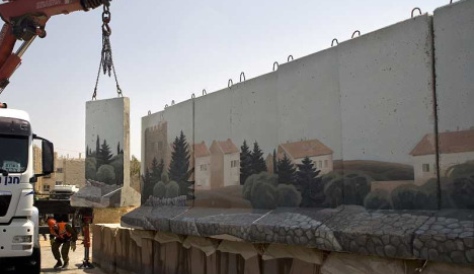 An Israeli army crane loads a part of a concrete wall in the Jewish neighborhood of Gilo in Jerusalem, Sunday, Aug. 15, 2010. (Photo by: AP)

This expedited schedule indicates a rush to approve and start construction on land claimed by Israeli settlers before Israelis and Palestinians achieve any substantive progress toward the establishment of Palestinian statehood. Many peace plans, such as the recently announced “Israeli Peace Initiative” (prepared in response to the Arab Peace Initiative of 2002) indicate that, in Jerusalem, “Jewish neighborhoods shall be under Israeli sovereignty; the Arab neighborhoods shall be under Palestinian sovereignty.”

If 1) international opinion is turning toward the establishment of a Palestinian state within a short timeline, and 2) neighborhood demographics are understood as the arbiter of how borders will be determined within Jerusalem, expediting the expansion of Israeli settlements can be interpreted as an attempt to claim as much land as possible within the Jerusalem region for the State of Israel.

This latest announcement of likely settlement expansion has stirred up “deep concern” for the United States. This concern rings hollow following the Obama Administration’s veto of a U.N. Security Council Resolution recognizing that the settlements were a barrier to peace. As you may recall, ELCA Presiding Bishop Mark Hanson expressed his dismay with the approach taken by the Obama Administration. The settlements, along with the separation barrier intended, in part, to keep the land they occupy in Israeli hands, will be a hot topic in the coming weeks and months. One hopes for the sake of both Israelis and Palestinians that they will not be allowed to continue being a flashpoint in the coming decades.

The image accompanying the April 6 Ha’aretz report on Israeli settlement expansion shows a crane lifting concrete and steel segments of the separation barrier into place. While the barrier in many places separates Palestinians from Palestinians, in this location it appears intended to separate Palestinians from the Israeli settler population. In the photo, one notices that the Israeli side of the barrier has been painted with a beautifully colored mural, painted across various segments which must be placed in a particular order. The mural depicts red-roofed houses (emblematic of Israeli settlement construction) and rich green foliage. One notices, however, that the photo also shows the landscape being covered by the barrier, perhaps a Palestinian village encroached upon by this new construction. The remembrance of Palestinians highlights what is missing in the mural: people. While the other side of the barrier is teeming with life, the image depicted on the barrier shows a neatly manicured landscape devoid of humanity. The indigenous population is elided from the landscape, removed from the present, erased from history, and severed from the land.

It is possible that this photograph was taken in a section of Gilo that does not abut any Palestinian population center, that the building in the background is one of the older settlement structures built after 1967. But the barrier tells the same story wherever it stands, often beautified on one side and slate grey on the other—comforting viewers on the Israeli “side” and reminding Palestinians on the other that they exist in a huge, open-air prison. These are not the things that make for peace.

Goldstone “Recants” Goldstone Report | The State of Israel in a post-Mubarak, post-Goldstone world