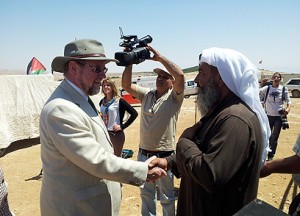 Delegation member meets a man from one of the Palestinian villages slated for demolition to make room for an Israeli firing zone. (Photo by Elior Levy)

European Union and other diplomats from around the world recently  toured some of the 8 villages slated for destruction by the Israelis to make room for a firing zone and called on Israel to halt the scheduled demolitions.   Ecumenical Accompaniers and other advocates from Rabbis for Human Rights and other groups have been following this situation and advocating for a halt to the demolitions for months.  See background on the villages.

A recent OCHA report summarizes the negative effects of the Israeli designation of large sections of the West Bank, especially the Jordan Valley and the South Hebron Hills, for firing and military zones.  Acording to OCHA, approximately 18% of the West Bank has been designated as a closed military zone for training, or “firing zone”; this is roughly the same amount of the West Bank under full Palestinian authority (Area A, 17.7%).

The diplomats visited the village of Jinba days after  a night raid by masked Israelis to take photographs of structures and count residents frightened the residents.