ELCJHL becomes member church of the World Council of Churches 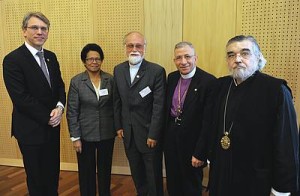 The Executive Committee of the World Council of Churches (WCC) meeting near Geneva at the Ecumenical Institute at Bossey voted to approve the full membership of the Evangelical Lutheran Church in Jordan and the Holy Land (ELCJHL) in the WCC. The approval ended a two-year process in which both the Executive Committee and Central Committee of the WCC considered the application of the ELCJHL. During this period, visits to the churches in Jerusalem and discussions with other member churches in the area took place. The ELCA has a long relationship with the ELCJHL.

“The ELCJHL widely identifies with ministries of the World Council of Churches,” Bishop Dr Munib A. Younan of the ELCJHL said in a brief speech to the Executive Committee after the vote, pointing to their support of the Jerusalem Inter-church Centre, the Ecumenical Accompaniment Programme in Palestine and Israel and the Palestine Israel Ecumenical Forum.

“We are honoured to serve God’s will through the essential ministries of the World Council of Churches,” Younan said. “The ELCJHL supports these ministries … because they show our people in Jerusalem, The Holy Land, and Jordan that their Christian sisters and brothers around the world stand with them, accompanying them in their sorrows and in their joys.”

Younan said, “in this age of globalization, we join with the churches in the world around us to be instruments of peace, harbingers of justice, initiators of dialogue.”

“The ELCJHL is richly blessed by the accompaniment we have received through this ecumenical body, and we hope that we have returned some of that goodness to you,” he said.

The ELCJHL, with its origins in 19th century missionary activity in the Holy Land, is made up of congregations in Amman, Jerusalem, Ramallah and the Bethlehem area. An updated count of WCC member churches will come after the WCC 10th Assembly being held in Busan, Republic of Korea, 30 October to 10 November, 2013.