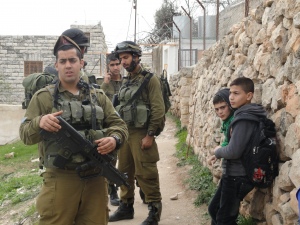 Tammie walked children to this school in Hebron, where here soldiers came to detain young students who were supposedly throwing rocks. This is Tammie's photo.

ELCA member Tammie Danielsen spent the winter in Hebron this past year as an Ecumenical Accompanier with the Ecumenical Accompaniment Programme for Palestine and Israel (EAPPI).  There she walked children to school to be a presence to prevent violence from Israeli settler attacks, as well as lived in solidarity and community with the local Palestinian residents.
Tammie is featured in an article this month in the Lutheran.
Hebron has been divided into two zones since 1997. The area under the control of the civilian Palestinian Authority is populated by some 120,000 Palestinians. The zone under Israeli military control is home to 30,000 Palestinians and 500 Israeli settlers.  The settlers – and military stationed there because of them –
have free access to areas, while some 1,830 Palestinian shops in the city center have closed due to restrictions on Palestinian movement, curfews and the sealing off of entire streets to Palestinians by the Israeli military.
EAPPI is an organization of the World Council of Churches begun in 2002 in response to the Jerusalem heads of churches request for other Christians to “come and see” what was happening in the Holy Land.  Volunteers spend three months in one of many sites accompanying the local residents as they work for peace and justice and to end the occupation.  The ELCA has sent more accompaniers from the US than any other US denomination.  For more information about the US program, see http://www.eappi-us.org.