Synopsis – Advocacy for a just peace for Israel and Palestine has focused largely on long-term solutions, even while daily life for Palestinians has deteriorated and inequalities have multiplied. While not ignoring the need for a permanent solution, including an end to the Israeli occupation of Palestinian land and the cessation of violence by all parties, much could be accomplished by addressing current inequities even if political progress on long-term solutions remains limited or virtually non-existent.

This position paper is intended to inform ELCA members and congregations of possible approaches to current realities in the Israeli-Palestinian situation. 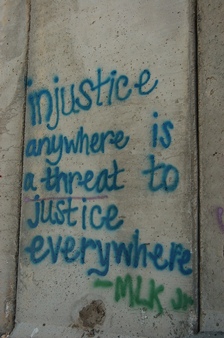 Inequities throughout the occupied Palestinian territories and Israel proper deprive many Palestinians of basic resources and fundamental freedoms.

In the occupied territories, Palestinian homes and other buildings have been demolished at an alarming rate to make room for Israeli settlers. West Bank residential demolitions in 2011 caused 1,100 Palestinians to be forcibly displaced from their homes, an increase of over 80% from the number of people displaced in 2010. In addition, over 4,200 people were affected by the demolition of “livelihood structures.” Elaborating on these statistics, the UN Office for the Coordination of Humanitarian Affairs notes, “These demolitions occur in the context of an inadequate and discriminatory planning regime that restricts Palestinian development, while providing preferential treatment to Israeli settlements” (1).  Meanwhile, Israeli settlements in the West Bank continue to expand. Peace Now reported a 20% rise in settlement construction starts for 2011 with East Jerusalem seeing a 10-year high for settlement plans (2).

East Jerusalem is home to about 270,000 Palestinians. In addition, around 200,000 Israelis live in ever-expanding East Jerusalem settlements. Palestinian homes are demolished, residents are evicted to make room for Jewish settlers, and land is threatened with confiscation for projects such as public parks. A permit regime keeps Palestinians from moving freely in and out of the city. The separation barrier erected by the State of Israel mostly in Palestinian territory restricts entry to Jerusalem for West Bank Palestinians while Israeli settlers can come and go freely.

Land inequities lead to unequal distribution of other natural resources, water in particular. About 80% of the water from the West Bank mountain aquifer, which Israel controls, goes to Israelis – including settlers – leaving only 20% for Palestinians (4).  Israelis consume four times more water than Palestinians in the occupied territories, 300 liters/day compared to 70 liters/day, according to a report by Amnesty International (5).

Palestinians in the West Bank suffer these and other daily indignities and deprivations. At the same time, Palestinians elsewhere face additional discriminatory policies. In Gaza, Palestinians live with inadequate infrastructure, high unemployment, and impediments to movement and access due to the Israeli blockade which imposes restrictions beyond those needed for Israeli security. Palestinian refugees throughout Lebanon, Jordan, Syria, Gaza and the West Bank are not allowed to return to their homes while Jews from anywhere in the world are free to immigrate to Israel. And within Israel, Palestinian citizens struggle under an unequal system which, for example, can prevent a spouse from the West Bank from joining his or her partner living in Israel.

Advocacy for a just peace has focused largely on long-term solutions, while daily life for Palestinians has deteriorated and inequalities have multiplied. While not ignoring the need for a permanent solution, including an end to the Israeli occupation of Palestinian land and the cessation of violence by all parties, much could be accomplished by addressing current inequities even if political progress remains limited or virtually non-existent.

Even without a freeze on construction, the harm caused to Palestinians by Israeli settlements could be significantly decreased by a halt to demolitions of Palestinian homes and other buildings. A fair distribution system for water can be implemented prior to a final status agreement. And laws governing East Jerusalem and Israel proper can be configured to treat all persons equally, regardless of ethnicity or religion, without waiting for boundaries and other outstanding issues to be resolved.

Shifting advocacy priorities to address inequalities will create opportunities to make real changes in the short term that will significantly improve daily life.

While many areas of inequality exist, suggested areas for immediate attention include calling for a halt to demolitions and insisting on equal access to Jerusalem, including equal access to religious sites. The former is particularly urgent given the recent escalation in home demolitions; the latter is of key importance to the economic, political, social and religious life of Palestinians.

Equality can only be instituted by the more powerful party, in this case the Government of Israel. Church-based calls for equality will be strengthened by insistence on consequences for the occupying power if it continues to choose inaction. Specifically, advocates in the United States can employ their citizenship and consumer choices in the service of a just peace. The ELCA’s 2005 Churchwide Strategy for Engagement in Israel and Palestine points out that U.S. foreign aid “helps frame the relationship between Israelis and Palestinians,” and affirms that the ELCA “will seek to expend God-given economic resources in ways that support the quest for a just peace in the Holy Land.” Calls for equality should be accompanied by the message to elected officials that U.S. aid will be contingent on respect for U.S. and international law, both of which support equality. And individuals can vote with their personal expenditures by, for example, exploring ways to avoid purchasing products grown or made in Israeli settlements.

Focusing on present inequalities will help many who are suffering even as a permanent peace remains elusive. The Rev. Dr. Martin Luther King, Jr. stated, “Injustice anywhere is a threat to justice everywhere.” By the same token, justice in one area can be a catalyst for justice elsewhere. The steps suggested here will benefit both Israelis and Palestinians, along with supporting peace for all in the region. Organized advocacy efforts, calling for equality and creating consequences for continuing inequality, are what is needed to make a real difference now.