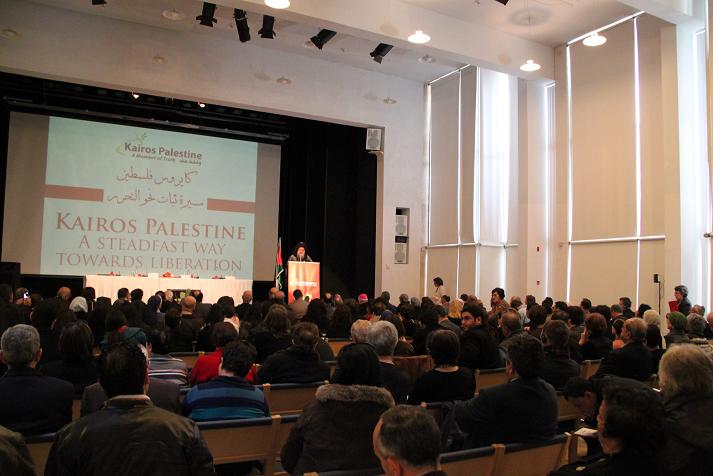 A recent gathering celebrated the 3rd anniversary of the original Moment of Truth document and released a new statement.

The Kairos movement began 3 years ago from Bethlehem when a group of Palestinian Christians released a document called A Moment of Truth: a Word of Faith, Hope and Love from the Heart of Palestinian Suffering.   Recently, a gathering was held to celebrate the third anniversary of the movement and produced a document:

The Palestinian Kairos document was issued at a time when the political process was facing a stalemate. Amid a diminishing hope for peace, it came to present a ray of hope which contributed to its fast and widespread reception on both the local and international level.

At the conference commemorating the third anniversary of Kairos, the church, as a group of believers, agreed that we are all suffering and that we are all on board  of the same ship. The differences we have are in form rather than content and substance. Islamic and Christian unity is based on a solid sense of belonging to Arab nationalism, citizenship, tolerance, diversity and coexistence.

1. From Despair to Hope

We heard your voices:

The people of Gaza are living witnesses of hope in their resistance, steadfastness and aspiration for a better future. Their steadfastness is reflected in their resolute insistence to remain on their homeland. At a time when the Israeli occupation is destroying everything in Gaza, the Christian institutions are building more schools and expanding their services.

From the Galilee, we heard the voices of Palestinian youth who feel a sense of the loss of identity and the need for handling this through more contact and  communication with their Palestinian sisters and brothers in Palestine in order to restore the Palestinian memory and their sense of belonging to the Arab nations.

From the Palestinians in Diaspora and based on testimonies of young returnees: there is a need for action to encourage the young people to return to their homeland. A national plan should be put forward in order to encourage emigrants to return home and to familiarize them with Palestine, the Arabic language and the Arab Palestinian culture.

2. Kairos: A choice between negotiations and resistance

Israel is heading towards extremism and is pulling the rest of the region into continued violence.

Human beings need to break out from their religious and doctrinal isolation in order to o truly know themselves, their humanity and that of others. Only then can they emerge from this circle of violence.

The original Moment of Truth document was not intended to be a balanced paper on the situation between Palestinians and Israelis, but a word from Palestinian Christians about their faith, beliefs, hope, life and reality.  On its website, Kairos Palestine says this about the original document:

This document is the Christian Palestinians’ word to the world about what is happening in Palestine. It is written at this time when we wanted to see the Glory of the grace of God in this land and in the sufferings of its people. In this spirit the document requests the international community to stand by the Palestinian people who have faced oppression, displacement, suffering and clear apartheid for more than six decades. The suffering continues while the international community silently looks on at the occupying State, Israel. Our word is a cry of hope, with love, prayer and faith in God. We address it first of all to ourselves and then to all the churches and Christians in the world, asking them to stand against injustice and apartheid, urging them to work for a just peace in our region, calling on them to revisit theologies that justify crimes perpetrated against our people and the dispossession of the land.

In this historic document, we Palestinian Christians declare that the military occupation of our land is a sin against God and humanity, and that any theology that legitimizes the occupation is far from Christian teachings because true Christian theology is a theology of love and solidarity with the oppressed, a call to justice and equality among peoples.

This document did not come about spontaneously, and it is not the result of a coincidence. It is not a theoretical theological study or a policy paper, but is rather a document of faith and work. Its importance stems from the sincere expression of the concerns of the people and their view of this moment in history we are living through. It seeks to be  prophetic in addressing things as they are without equivocation and with boldness, in addition it puts forward ending the Israeli occupation of Palestinian land and all forms of discrimination as the solution that will lead to a just and lasting peace. The document also demands that all peoples, political leaders and decision-makers put pressure on Israel and take legal measures in order to oblige its government to put an end to its oppression and disregard for the international law. The document also holds a clear position that non-violent resistance to this injustice is a right and duty for all Palestinians including Christians.

ELCA, other US churches call for examination of aid to Israel | Former President Jimmy Carter leads “The Elders” to Jerusalem