The Rev. Fred and Gloria Strickert are ELCA missionaries in Palestine. Fred is pastor of the English-speaking congregation at the Lutheran Church of the Redeemer in Jerusalem. To support the Strickerts, a Young Adult in Global Mission coordinator or another of the ELCA’s nearly 250 missionaries, go to www.elca.org/missionarysponsorship. 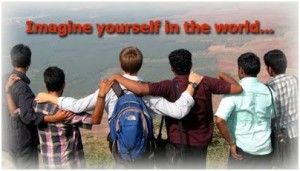 We have been blessed this past year here in Jerusalem with six amazing, dedicated, and talented young adults (we call them YAGMs) who have impacted our lives and the lives of the Palestinian church, while taking a giant step that means they will never see the world in the same way as before.

I still remember the day 12 years or so ago when my academic advisee, Brandon, walked into my Wartburg College office announcing that he had decided to take a year off from college for this new ELCA program in England called “Time for God” — that was what the program was called that first year. I tried to talk Brandon out of it. “I’ll never see you again,” I told him. “You’ll just drop out of school.” Instead, Brandon returned a year later a different person, a new and improved Brandon, a Brandon who had new eyes for his academic work, a Brandon with a strong sense of calling for work in the church.

Over the next years, I found myself encouraging students to apply for this new YAGM program. Hearing about their experiences, I learned a lot about the world and the global church. I also came to realize what a gem the ELCA has in this life-shaping program.

Consider the impact that 419 YAGMs have had on the church returning from a year of service over these last 10 years — 40 to 50 every year.

Now after a year, we have said our farewells to our six YAGMs, who living and working side-by-side with Palestinian Christians have changed the perceptions about Americans while having their own eyes opened about people mostly neglected and often inaccurately maligned in the media.

By now, our six YAGMs — Janelle, Sarah, Abby, Trena, David and Luke — have arrived in the States, readjusting with culture shock but energized, and realizing they will never be the same. Two are heading to seminary this fall, one to grad school in social work, one to Lutheran Volunteer Corps, one to a community art program, and one to serve as a recruiter for ELCA Global Mission before later enrolling in Dental School.

In Jerusalem, there is an empty spot without them. By the end of August, however, we will be welcoming Michelle, Sara, Megan, Alma, Courtney, and Laurin-Whitney as they begin a year as Young Adults in Global Mission.

So we invite your prayers for the entire YAGM program throughout the world and especially here in Jerusalem.