‘The Latin American Way of the Cross’ 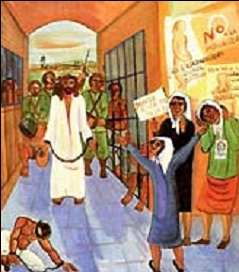 As missionaries serving in Latin America, we are often asked how liberation theology affects our ministry.  “Liberation theology” was coined by Peruvian priest Gustavo Gutierrez in 1971 to describe a movement emerging in Latin America that views Christ’s life and teachings through the eyes of those who are marginalized by unjust political, economic and social systems.

One way this theology has penetrated our spiritual lives has been through a series of paintings by Adolfo Perez Esquivel, an Argentine human rights activist.  In 1980 he won the Nobel Peace Prize in recognition of his leadership in a nonviolent movement to oppose the military dictatorships in Latin America.  Esquivel’s paintings, “The Latin American Way of the Cross” walk us through the Stations of the Cross from the perspective of those who suffer injustice in Latin America.

Meditating on these paintings during Holy Week has visually and spiritually integrated Christ’s suffering with the historic and current struggles of people in Latin America.  This meditation refocuses and renews our understanding of what it means to be a disciple of Christ.  As we visualize Christ’s life through the lens of the cross, we see … it was a life of complete solidarity with those who suffer in this world.  As Christ’s disciples today, we are also called to continue the ministry of healing and transformation that he began among the people who lived at the margins of society during his time.

When we walk along this Latin American Way of the Cross, we also arrive at new understandings of the resurrection.  In the final painting of Esquivel’s stations of the cross, the resurrected Christ stands with those who have suffered persecution in Latin America from the time of conquest through colonization into contemporary times. In the unwavering hope of these people who never lost faith despite all of the injustice that they faced, we see the true power of the resurrection.

Our prayer for this Easter season is that we may be renewed in our discipleship to walk ever more faithfully with our companions along the Way of the Cross as it is the only path that leads us to a full understanding of the power and hope of the resurrection.

Next Post: The Wave and the Harp – the story continues »