Awaiting the Big One

“Did you feel it?” That is the question everyone asks whenever the news in California reports a small earthquake. Most California quakes do not do any visible damage, and only a small percentage are actually felt or heard by the people living in the region. But seismologists predict that there is a 63 percent chance of a strong and destructive earthquake within the next 30 years in the area of San Francisco. Taking all of California together, the chances for what’s called “the Big One” are 99.7 percent. 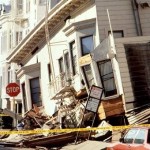 California will probably experience a strong earthquake in the future because of movement in the earth’s crust. The Pacific and the North American Plates meet there and grind against each other for hundreds of miles. This is even visible to the naked eye and is called the San Andreas Fault. The movement of the earth’s crust slowly builds up pressure and energy, which is, at some point, released in an earthquake. On April 18, 1906, such a pressure release killed 3000 people in San Francisco and destroyed large areas of the city.  Seismologists from the University of California in Berkley have found that the earth, although solid on the surface, reacts to the movements of sun and moon, just as water does. These mini-tides can be recorded as tremors which make areas like the San Andreas Fault move. Scientists write in the current issue of the magazine Nature (December 2009) that such small tremors do not cause big earthquakes but increase the strength of the movements happening in the San Andreas fault.

Did you feel it? Californians hope that this question will always be answered with “no”. But chances are that one day soon an earthquake and its aftermath cannot be missed. Learning more about how earthquakes originate and what makes them stronger might help us take better precautions. Unlike other animals, which sometimes sense impending earthquakes better than humans, we have to rely on scientific data to have an idea when one might be imminent.

2. Have you ever experienced an earthquake or another natural catastrophe? Could you sense it coming? What did it feel like?

3. Some people experience pain when the weather changes or say that they can “smell” coming rain. Are you able to predict such changes? If not, do you think that some people are actually able to do it?

The story we hear today from the Gospel of Luke is one that describes an early part of Jesus’ life. Luke has portrayed the pregnancy of Mary and the birth of Jesus and has continued with the events in the temple when Jesus was just 12 years old. We now meet a new character. John the Baptist, whose mother visited Jesus’ mother when they were both pregnant, begins to baptize people in the wilderness. People flock to John and some even wonder whether he is the long-expected Messiah. But John shatters these hopes and points to the Messiah coming after him. John was not much liked by the government. He was put in prison and later killed. But, before his life came to an end, one of the people he baptizes is Jesus of Nazareth.

Something amazing happens at that particular baptism. Imagine what it must have been like for Jesus. As an adult, he decides to receive the baptism by John, which is supposed to free from sins. He steps down to the river or creek, feeling rocks and sand beneath his worn shoes. He feels both John’s strong hands as the Baptist dunks him into the water and a sense of trust that John will lift him back out. He feels the water—cold and refreshing—cleansing his body and also, in a way, his mind. Then, he sees the heaven open. He sees a dove, the Holy Spirit, coming down towards him.  Maybe he feels and hears the flapping of her wings. Jesus  hears God speaking, telling him that he is the  beloved son with whom God is well pleased. Feeling the water, touching it, being touched by John’s hands, seeing the heavens, hearing God’s voice – Jesus’ baptism addresses most of his senses and, because of it, envelopes him entirely. Unfortunately, Luke does not tell us what it is like for Jesus to hear God and to see the Holy Spirit at his baptism. But he records the effect that this sense-filling event has on Jesus:  right after the baptism, Jesus begins his work.

When the early church began to baptize people into a Christian life, they modeled their practices after the story of Jesus being baptized by John. Of course, there were proclamations of what baptism means, that it is an act of repentance and causes the forgiveness of sins. But more than is often the case in modern churches, baptisms in the early church also addressed the senses of the baptismal candidates. Days of fasting prepared them for their baptism. Several times before and during the baptismal ceremony, the baptismal candidates were anointed with oil. In what was called the “ephphata ceremony”, a mixture of dirt and spittle was put upon their ears and nose to symbolize the opening of ears in Mark 7:33-34. And when the actual baptism happened, a lot of water was used so that the baptismal candidates could be fully immersed. Baptism back then could be truly felt, truly seen, truly heard. It could be experienced with most of the  senses.

In Luther’s day the church had already moved away from some of these more sensual experiences of baptism. The church performed many remaining actions in almost magical ways, as if baptism was not valid unless all of these rituals were performed. While Luther tried to rid the church of some of the more magical looking rituals, he strongly felt that the sensual aspects of baptism should remain. In his early writings about baptism, he even demanded that baptism should be by immersion to symbolize that our old sinful self is drowned and our new baptized self is resurrected. Luther asserted that baptism should be experienced with all our senses, just as God wants to be in our minds, spirits, and body – in all of what makes us human.

1. Are there experiences in life where the senses of smelling, tasting, and feeling might enhance your perception or help you remember? Do you have an early childhood memory which is connected to one of these senses?

2. What senses (hearing, seeing, smelling, tasting, and feeling) do we use in worship and at what parts in the liturgy?

4. What are, in your opinion, the pros and cons of worship that addresses our senses?

5. Have you experienced worship in a congregation other than your own? If so, did that service address the human senses more or less than is done in your church?

1. Jesus and the human senses.

Split your group in four small groups and assign each of them one Gospel. Ask your groups to find stories where Jesus not only speaks to the people but addresses their other senses. Share these stories in the large group and talk about what Jesus accomplishes when he helps people to understand his message by letting them smell, taste, feel, or see.

Read the healing story in Mark 7:32-37. Talk about the way Jesus addresses the human senses there and what effect that has on the bystanders watching.

3. Heightening the senses in worship.

If using our senses helps us experience things on a deeper level and helps us remember, why don’t we use our senses more in worship? Think about the way that worship in your congregation could be more sense-oriented. Ask your pastor how he/she plans worship services with the use of our senses in mind.

Here are some suggestions for activities where your youth can try their senses. If you have a small group, let everyone try a few samples. If you have a larger group, split them up so that everybody has a chance to experience this exercise. If you make it a competition, you might have a prize for the winner(s).

a) Smelling: Prepare samples of distinctive smelling things such as communion wine, herbs, flowers, incense and other in containers that are all the same size and are closed with a lid. Then, see who can identify of an object by using only the sense of smell (you need to cover participants’ eyes and have someone else present them with the opened container).

b) Tasting: You can also have a taste test using foods which people try with their eyes covered. In that case, make sure to choose foods which everybody likes and tolerates.

c) Feeling: Have people feel small objects – again, with their eyes covered – and name what they should represent. Cookie cutters or wooden toy animals work well.

d) Hearing: Play the beginnings of famous pop songs (or even hymns) until the first person can name the title. Ask your group to listen to half of them with their eyes open and to the other half with their eyes closed. Ask whether it was easier to guess when they only used their sense of hearing rather than their senses of hearing and seeing.