Warm-up Question:  Think about a person you admire very much, living or dead. Suppose you were called upon to write a tribute to that person’s life and accomplishments. What would you say? 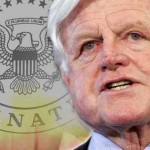 Senator Edward Kennedy, the last son of what was once called a “dynasty,” died August 25th after a year-long battle with brain cancer. He was 77. Like his slain bothers, John and Robert, Edward, nicknamed Teddy, was known for his charisma, his strong opinions, and his far-reaching political influence. He was re-elected to the Senate nine times by Massachusetts voters and once made an unsuccessful attempt at a presidential nomination.

The Senator’s career spanned the time between the idealistic years of JFK’s presidency and the disillusionment that followed the Vietnam War. He considered it his mission to maintain and advance the progress in civil rights, relief for the poor, fair wages, and equal rights for women begun by his brothers. His most recent efforts were directed at the passing of President Obama’s healthcare bill.

For all his accomplishments, one large blot remains on Senator Kennedy’s record: the drowning death of a young woman in a car he had been driving when it crashed through a bridge. Rumors persist that he used money and influence to avoid charges of negligence in her death.

Friends and relatives gathered for a “Celebration of Life” at the John F. Kennedy library, which included speeches by Senator John McCain, Vice President Joseph Biden and Caroline Kennedy Schlossberg. President Barack Obama will deliver the eulogy at the funeral Mass at The Basilica of Our Lady of Perpetual Help, Boston, where the service for Kennedy will take place.

The Gospels portray many sides of Jesus’ ministry and personality. In today’s lesson, we see Jesus the celebrity. But he is not like other public figures. He does not seek or want fame or fortune. He has none of the trappings — no money, no style, no ego, and no fancy mansion. He is simply obeying his Father — the one who sent him (Mark 9:37) — fulfilling the destiny predicted for him (Isaiah 35:5-6a).

But word gets around, even when Jesus warns those he has healed not to talk about it. His fame has spread among the Gentiles and a Greek woman comes to him for help, seeking the healing of her daughter possessed by an unclean spirit. She proves herself more willing to receive Jesus’ message than many Jews, correctly perceiving the scope of his mission. She is persistent and pushes back at Jesus with a sharp response that even the Gentile “dogs” (a slur used by observant Jews at the time) can receive attention and healing from the Messiah.

The deaf and dumb man, too, gets personal attention from none other than the Lord of glory. According to Isaiah, these actions prove that Jesus is the Chosen One through whom we see the power and presence of God. But in these same acts, we also see his caring heart and love for even the humblest of people.

Today’s Psalm tells us to “Praise the Lord (Psalm 146:1),” and “Do not put your trust in princes (Psalm 146:3).” Political leaders, no matter how well-known and well-intentioned, make mistakes, misuse their power, fall, and disappoint. The people who were healed in today’s lesson knew whom to praise and where to put their trust. Jesus did not fail them, nor will he fail us. As he has compassion on us, let us have compassion on others. As we put aside personal fame, attention, and admiration to help people living in hunger, poverty, illness, and injustice, let us show them the One in whom we trust and sends us — Jesus — so that they may believe and follow him, too.

Activity 1:  Individually, or as a class, list the gospel-centered goals you talked about in question #4. Then list some concrete life goals (study law, write songs, marry and have children, travel, make pizza, etc.). Verbally or in writing, describe how spiritual goals connect with the practical, for instance, how might you practice humility as lawyer? Serve others as a songwriter? Etc.

Activity 2:  In groups, take the list of desired traits (the groups may add some if they wish) and rank them in order of importance in living a life of Christian witness and service. Discuss why you ranked them as you did. Choose one or two individuals from each group to report to the class on how they ordered the traits and why. This activity may also be done as a discussion with entire class. Note and respect the variations of opinion and decisions between groups or individuals.

Almighty God, our Father, all we have comes from you and without you we are nothing. Re-form our desires and goals, so that we may live the abundant life you have for us — a life of selflessness, service, generosity, and joy. We pray this in the name of your blessed Son whose example we follow — Jesus Christ, our Lord. Amen.