Suppose you got off the plane after a long vacation and saw a headline announcing your death. Someone had started this rumor and gotten others to believe it. How would you go about proving that you are still alive? 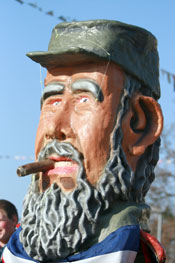 “I don’t even remember what a headache feels like!” So declared Fidel Castro in an article published on Cubadebate, the state news website. The purpose of the article, titled “Fidel Castro Is Dying,” was to assure the Cuban people that the old revolutionary was still alive and healthy at 86. Rumors that the former dictator had suffered a severe stroke and was barely hanging on had been swirling around in the world press for days.

Photos of Castro strolling around his farm using a metal cane, taken by a visiting Venezuelan dignitary, appeared with the article. The South American politician said he talked with the notorious Communist strongman for five hours and was then escorted to his hotel by Castro in a chauffeur-driven minibus.

Castro’s article also tore into the “imperialist propaganda” spread by the non-Communist media. The rumor was traced to a Venezuelan doctor in Miami, who claimed to have heard that the Cuban leader was near death.

Raising from the dead is a tough sell. Everyone knows that there’s no getting around death. It takes a lot of proof to convince any sane person that someone could conquer this greatest enemy of humankind.

There are always rumors, of course. Jesus raised several people from the dead, and word must have gotten around. But people were just as skeptical in those days as they are now. The person wasn’t really dead, they would say. Jesus is a fake, and intelligent people don’t put any stock in such foolishness.

But Lazarus was different. A whole crowd of people had been weeping over him for four days. Some of them probably helped to wrap the body in the grave clothes. His sister Martha was certain there would be a terrible stench if the grave was opened. Death was as ugly then as it is now. Even Jesus wept at the sight of it.

Wait, what it this? Open the grave? Call on God to hear? And what is this “Lazarus, come out”? What does this man think he’s doing?

Raising Lazarus from the dead.

There was nothing especially glorious about it. A man trying to walk while stuck in a shroud was just as scary then as it is now. And cutting him free couldn’t have been very pleasant. Yet all those repellent practicalities drove home the point. This man really was raised from the dead. Those who doubted had only to look.

Word got around and is with us today:   Jesus has power over death – Lazarus’ death, his own, and finally, ours as well. Some stand and say, “Prove it!” Some sit and say, “Forget it.” Some turn away and say, “It’s just a rumor.” And some fall to their knees before Jesus Christ and say, “My Lord and my God!”

Jesus has the words of eternal life, the power to conquer our most fearsome enemy, and we know we can trust in him. That is why we are called “believers.”

[Note: Talking about death is not easy. It may help students to be more comfortable, if the teacher “breaks the ice” and gives a personal answer to the first question. Be sensitive to students’ feelings.]

Almighty God and Conqueror of death itself, we thank and praise you for the death that gives us life – Christ’s crucifixion – and the resurrection that was his and will someday be ours. Fill us with your holy joy at this good news and help us to share it with those who are fearful and doubting. In the all-powerful name of your Son, Jesus Christ Our Lord, Amen