Think of the most unexpected thing that has ever happened to you.  It could be anything:  a good surprise, a horrible tragedy, school suddenly canceled, a public disaster, a family event – anything.  Were you ready for it when it happened?

Blow Out, Blow Up…Have No Fear 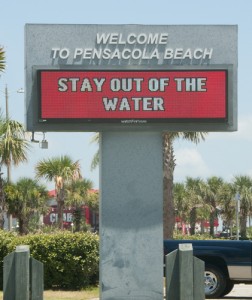 Spring and Summer 2010 have been dominated by one news story more than any other:  the British Petroleum oil spill in the Gulf of Mexico.  It began in April, when a BP oil rig caught fire and collapsed, destroying the pipe that led from the rig on the surface of the water down 5,000 feet to the opening on the sea floor. It produced such a visible and disastrous effect on the environment that it was still a daily headline near the end of July, even when the leak was successfully capped.

Public accusations, calls for justice, and pleas for help stand alongside a  host of “should haves”– the United States government should have exercised more regulation, British Petroleum should have been more careful, the oil industry should have been less greedy, solutions should have been thought of sooner, everyone should have tried harder, environmentalists should not care so much.

As soon as the spill happened, everyone had an opinion about what was wrong and how to proceed.  And yet, before the spill, few people outside of the oil and gas industry could have said how much oil drilling goes on in the Gulf of Mexico.  Even fewer could have identified the specific risks associated with deep-water drilling.  The American public has received quite an education during these days, and Christians have been faced with an additional series of questions that derive from our faith and the witness of the scriptures.

This passage consists of a huge string of wisdom sayings from Jesus – so many that each one by itself would be topic enough for a whole discussion. These sayings, along with those in surrounding passages, are all oriented toward anticipating the future with clear certainty about God’s sovereignty over, not only the inhabitants of this world, but the events of history.  Jesus advises us first to know our priorities, making sure those are carefully sorted out, so that being recipients of the grace granted to us by  God holds first place in our lives.  If we have that clarity of orientation, then we will also be ready when Christ returns.

Jesus does not call us to prepare by focusing on that final event – the return of Christ and judgment of the world – but rather by focusing on him, sent by the Father to bring humankind to faith.  Even today we hear Christian people fret over the second coming of Jesus, proclaiming that they know the date for the so-called “rapture of the church.”  This passage rejects such speculation.  We are not to look far into the future, calculating the “profit” we will make in figuring out God’s timetable.  Instead, we are to be about our daily work – loving Jesus, sharing the good news with others, and bringing whatever gift we have been given to the service of God’s people.

Leaf through scripture and see if you can identify people occupied doing their ordinary work.  These are people who are often the very ones whom “the master finds alert when he comes.”  God often calls just such to be great instruments for God’s purposes in the world.  What is your ordinary work?  How do you focus on Christ day-to-day and so make him your first priority?   Does it help your walk of discipleship to imagine what Christ might find you doing should he return at some point today?

Lord Jesus, we recall your command to your disciples to proclaim the gospel to the whole world, and we hope to make it our own by our obedience to this calling.  We pray for all who have been affected by natural and unforeseen forces.  Help us find words to console those whose mourning includes the frustration of a disrupted life.  Let them, with us, keep our focus on the work to be done in the present, so that you may find us faithful servants and good stewards of these gifts you have given us – the lavishness of grace and the beautiful abundance of creation.  Amen.