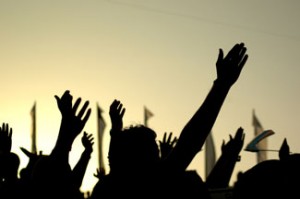 Protests continue in Cairo, Egypt, where thousands of demonstrators have assembled in Tahir square to call to account the oppressive government of Hosni Mubarak, the country’s sole leader for 30 years. Shouting and waving signs, protestors call for democracy and demand that the leader step down.

Mubarak has appointed a Vice President, fired his cabinet, said that he will not run for re-election, and agreed to talk with representatives of the opposition, but the unrest has not died down. Tents have appeared in the square, giving the impression that the rebels are in for the long haul.

The government has cut off Internet and phone services, but pictures and descriptions of the violence between the police and the opposition have leaked out. The United Nations estimates that 300 have died and a thousand more have been wounded.

The arrival of government troops is not bad news. The army is seen as neutral and even sympathetic towards the protestors’ cause, unlike the police, who represent the Mubarak leadership exclusively.

Older members of the resistance suggest that a slow transition might be best for the country as a whole. But the young people who began the protest want Mubarak to leave immediately. There seems to be no doubt that Mubarak will leave office. The only question is when.

“Do not resist an evildoer.” What, never? “Give to everyone who begs from you.” Surely not everyone. “Love your enemy.” What enemy? Just who is Jesus talking about here? In the historical context he is talking about representatives of the Roman Empire: governors, officials and soldiers.

Any Jew of that time would have understood this. The Romans were keeping them from the Great Kingdom God had promised them, a peaceful, prosperous Israel ruled by a descendant of King David. If it weren’t for those lousy Romans, the Jews would be fulfilling their destiny in the Promised Land. This was the attitude to which Jesus was speaking.

Imagine how shocked his Jewish listeners were when he told them, not how great and deserving they were, but how humble and giving they should be. His uncompromising words (“Be perfect… as your heavenly Father is perfect”) were meant to wake up God’s chosen ones to what they were actually chosen to do – set an example of humility, generosity and love to the world.

As Christians of today, we don’t like to hear this any more than the people of Jesus’ day did. The world rejects the virtues our Lord describes. Which, of course, is all the more reason to practice them.

In a world full of selfishness, unrest and injustice His words still apply – “Do not resist…Give to everyone… Love your enemy.”

Suggested songs: Onward, Christian Soldiers, Take My Life and Let It Be

Lord, we give thanks and praise that you are the God of justice and peace, of courage and humility. You call us to action against evil, yet bid us to practice gentleness and love. When we question how these things can be, remind us to be imitators of Christ in all things. Only through Him and His words to us can we fulfill His commands. In the name of our Savior, Jesus Christ, Amen