Warm-up Question:  What would be the job that you would least want to have? 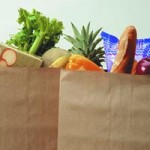 Joe worked as a bagger at the local grocery store for nearly 7 years. Joe, age 25, has Down’s syndrome. He worked quietly and carefully placing groceries in bags and thanking customers for coming to shop. A bagger is not a particularly prestigious job, but Joe didn’t see it that way. He enjoyed serving. The manager of the store gathered together the employees for a sales pep talk. Joe, as a good employee, attended and listened intently. The manager encouraged all of the employees to take ownership and creativity in the grocery store and to each come up with an idea that would encourage and support their customers.

Joe left the store in search for an idea. He went home and talked to his father about putting an inspirational cartoon or quote in the customers’ bags as they left the store. Joe chose a quote and his father helped him copy and cut the quote into slips of paper so Joe could add them to the bags with the groceries. The next day at work Joe quietly slipped his thought for the day into the bags and passed them to the customers. It made Joe happy, and his customers too.

A couple of weeks later the manager of the grocery store was alarmed to see a line of 20 people in the lane where Joe was bagging. He opened up multiple lanes for people to move to. He was surprised when people wanted to remain in Joe’s lane to receive his inspirational quotes. One woman told the manager that she comes in every day to pick up something just to get Joe’s quote. Joe’s quiet kind service turned a mundane job and shopping experience into one of community and care.

In the gospel text, the disciples are experiencing rivalry within their community. The brothers James and John desire to rise to the right and left hand sides of Jesus in his kingdom. At this point, they do not realize what this means for them; they believe that Jesus’ kingdom will be some sort of kingdom on earth.

James’ and John’s blatant grabs for power create a conflict for the community of Jesus and the other ten disciples. When the other disciples hear this scramble for power and recognition, Jesus uses it as a teaching moment for them as well. Jesus teaches all twelve disciples that in order to be great you must be a servant. This concept must have been as hard for the disciples as it is for us today.

Jesus came to teach us how to serve each other — including strangers. Joe wanted to serve in his grocery store in a humble, subtle way that made a difference to hundreds of grocery shoppers. We are taught in our society, as in societies before us, that rising to power and rivalry is the way we get to the top and get recognized for our accomplishments. We sacrifice our values and sometimes our friendships to be able to be competitive and gain prestige or power. Joe didn’t care about prestige or power; he wanted to be able to serve the best he could. How many of us try to serve in all aspects of our lives by trying our best in humble, subtle ways?

“Jesus came not to be served,” as many would imagine of a great ruler and king, but he came “to serve”. Serving and repsecting others builds and strengthens community and does not divide people or pit them against each other. We are to go and do likewise and serve our neighbor.

Blessed Savior, thank you for serving us. Help us to remember to serve others. We know that at times we look for power and prestige, but we ask you to help us redirect ourselves during those times. Bless those who serve others with their lives. Enable us to learn and live extraordinary lives of service in your humble way. In your name we pray. Amen.

Warm-up Question: How would you define greatness? 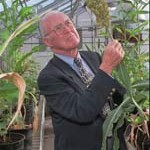 Dr. Norman Borlaug, a man who is credited with saving the lives of over 1 billion people and being the “grandfather of the Green Revolution,” died last week at the age of 95. Most of Borlaug’s life was spent finding new ways to increase grain yields in developing countries. His discovery of new type of hybrid wheat strains helped nations avoid widespread famine in the 1950s and 1960s. He was awarded with the Nobel Peace Prize in 1970 for increasing food security in Mexico, Pakistan, and India. Some call Borlaug “the most important man you’ve never heard of.”

Borlaug grew up on a farm in northeast Iowa, the great-grandson of Norwegian immigrants. His grandfather was instrumental in founding a Lutheran church in their community. As he grew, Borlaug developed a love of agriculture and science. He took what he learned in the field and applied it in the labs at the University of Minnesota. From there, he studied how various seeds and fertilizers responded to different climates and geographies.

In addition to the Nobel Peace Prize, Borlaug has also been awarded with the Presidential Medal of Freedom and the Congressional Gold Medal. The only other people to receive all three honors are Mother Teresa of Calcutta, Elie Weisel, Nelson Mandella, and Martin Luther King Jr. In 1986 Borlaug established the World Food Prize which acknowledges people who work to increase the quality and quantity of food in the world.

People close to Dr. Borlaug described him as humble, gracious, and unassuming. In one of his last interviews, Borlaug summed up his efforts by saying, “You can’t build peace and tranquility on empty stomachs and human misery.”

Jesus and his friends are taking a long walk (30+ miles) from Mount Hermon to Capernaum. As with any road trip, there were lots of different conversations along the way. One discussion centered on the topic of greatness. The disciples were arguing about who among them was the greatest.

Before we become quick to judge their selfishness, let’s remember the life they had been living for the past few years. Most of these men were from humble origins. They literally dropped everything when Jesus told them to “come and follow me”. This ragamuffin group walked from town to town, not knowing where they would sleep or what they would eat. They had lived as peasants alongside a man who called himself the King of Kings and Son of God. Wouldn’t we be tempted to have a similar conversation about who was the best, the favorite, the most loved, or the greatest disciple?

We learn that Jesus chose not to engage the disciples in the conversation until after they had arrived at Capernaum. Instead of privately addressing his friends, he chose to publicly admonish them for their egocentric chat earlier in the day. Jesus’ decision indicates that he is really angry with his friends and he wants them to be humbled, or perhaps he thinks that there might be others in the room that have had similar discussions with their friends. Siblings that argue about who is the favorite. Servants that claim to be the most dedicated. Carpenters who think they are the best at their craft.

Jesus tells everyone that being great requires becoming a servant; being powerful means becoming childlike. In saying this, Jesus not only reminds his disciples about the foolishness of their argument, but he also is telling people about himself. Jesus’ greatness is not exhibited by military might, shrewd political strategy, or the ability to wave a hand and make things happen. His greatness is manifested in serving others and caring for those in need.

Earlier in Mark 9 we hear Jesus tell his disciples not to tell others about the amazing things that happened on the Mount of Transfiguration. Those words, along with the appointed text from today, give us a clear indication of how Jesus chooses to function. He preferred to teach, heal, and preach quietly and faithfully instead of boasting about his importance. Jesus’ greatness is seen in his service to others and not in making a public spectacle of his mighty acts.

(Check with your worship committee or pastor before doing the following activity… or at least give them a heads-up.)

Give each student several colorful index cards or sticky notes. Set out colored pencils or markers for everyone to share. Have people write an affirming statement or scripture verse on each of the papers. (Example: “Jesus loves you” or “Romans 8:38-39”.)

Go to the sanctuary and place these notes into the pages of the hymnals. If a worship service is taking place after your meeting time, stick the note in the page of one of the hymns that will be sung during worship. That way, you know someone will read it!

God, help me to serve you by serving others. Give me grace to be humble in my serving. Thank you for sending your son to make the ultimate sacrifice so that we might live eternally with you. Amen.