Warm-up Question: Have you ever been discouraged enough to give up on an idea, project, or goal? 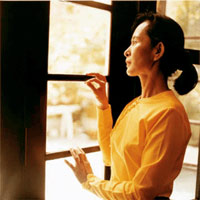 Nobel Peace laureate Aung San Suu Kyi was convicted of violating her house arrest on Tuesday after an uninvited American stayed at her home. She is to serve an additional 18-month sentence.

Suu Kyi’s detention has already spanned 14 of the last 20 years, most under house arrest. The additional sentence will effectively remove her from contact with the public leading up to next year’s elections in Myanmar (Burma).

U.S. citizen John Yettaw swam a restricted lake to reach the home of Suu Kyi after claiming he had a vision of an assassination attempt on her life. He will receive three years for breaching her house arrest and three years for swimming in a restricted zone. He is scheduled to serve his sentences consecutively at Insein prison. (John Yettaw was freed on Sunday, Aug. 16, after international pressure and the visit of a U.S. senator.)

The maximum sentence for Suu Kyi was to be five years in prison or three years hard labor. By order of Chief Senior General Than Shwe, her sentence, as well as those of her house companions, was commuted to be served at home, a move the junta leader said would help maintain stability and peace.

South African Archbishop Desmond Tutu denounced the trial as illegal and Secretary of State Hillary Clinton said that the trial should never have taken place.

International reaction has ranged from requests for a global arms embargo of Myanmar, to public statements from Amnesty International calling the sentence for Suu Kyi shameful legal theater since it comes just weeks before her current sentence was to expire.

The Gospel today presents a true crossroad and genuine question for those who follow Christ, both then and now. At the heart of the matter is not Christ’s identity, but our identity in and through Christ.

Crowds gathered around Jesus for all kinds of reasons: curiosity, healing, political and religious power. Today’s Gospel takes all of those and lays down the pre-crucifixion groundwork, looking for listening ears and willing hearts. “Those who eat my flesh and drink my blood abide in me, and I in them.” (vs. 56)  And, “…I live because of the Father, so whoever eats me will live because of me.” (vs. 57) Jesus’ words, body, and spirit bring eternal life. Yet even as he taught in the synagogue in Capernaum, his disciples complained and questioned him. Many left, and only the twelve remained. (vs. 65-69)

Suu Kyi is the daughter of Aung San, a hero who is credited with winning Myanmar’s independence from Britain. By keeping her under house arrest, the military can conduct future elections without her influence on the public. There is more control when she is controlled in this situation, even as international pressure mounts for her release.

The expectations surrounding Jesus provided political and religious division and turmoil soon after today’s lesson. Jesus did not bow to pressure from any side or faction. He continued to teach of God’s revelation of love through himself, and through those chosen to hear and understand his words. Ultimate control was not, and is not, in the hands of  humans. God’s love is revealed and exercised in and through Jesus’ words and actions no matter what we do, decide, or think we have control over.

God has chosen us to be participants in the fullness of eternal life through Christ. It is both invitation and gift — at the same time. What will our response be as we face political, religious, and social challenges in today’s world?

The ELCA holds its 2009 ELCA Churchwide Assembly at the Minneapolis Convention Center in Minnesota, August 17-23, 2009. The theme is “God’s work. Our hands.” The issues being considered for action are:

(Learn more about the ELCA Churchwide Assembly, its purpose and structure, who can attend and vote, and the issues and actions being considered.)

Study the agenda and pray for your congregation’s voting members at the Churchwide Assembly, and the representatives of our synodical and churchwide leadership. Once you’ve learned some of the background, discuss what opinions and convictions exist in your own group.

Plan a class session to follow up on the voting results of the assembly.

Request permission to have a representative of your class attend a church council meeting and report back to the class the following Sunday (or whenever you meet). Note any opportunities to participate in the ministries of your congregation, both large and small. Choose a project or a way of being involved that the class or individuals can follow up on with the church council or congregational leadership.

Lord Jesus, you have the words of eternal life. Bless our churchwide representatives as they faithfully discuss, consider, and make decisions on issues important in our lives, church, and society. Continue to motivate each of us to take action when called upon to do so, that your life and love may ever be glorified. Amen.