Look at the picture below.  What would you substitute for “especially bookstores”?

Lead Us Not Into Temptation 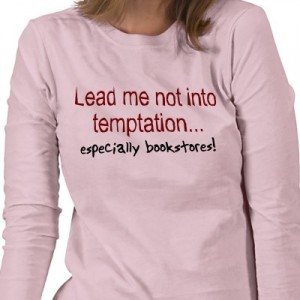 In seeking a thought-provoking picture about temptation to kick off this devotion, I noted that they were almost all one of two general types: (a) photos of women being tempted by food, especially chocolate; and (b) seductive, revealing photos of young, buxom female beauties, presumably representing the most common and compelling temptation for men.

But there are temptations other than overindulging in rich food or engaging in illicit, casual, uncommitted sex. I should wear a shirt like the one in this photo. No matter how many unread books are already on my shelf, no matter the state of our family budget, lure me into a bookstore, and you can be sure I won’t walk out without at least one more book to add to my library.  It’s not exactly “shop ‘til you drop”, but more like, “There’s always room for one more on my shelf”, and “I’ll read it later.”

Matthew tells us that “Jesus was led up by the Spirit into the wilderness to be tempted by the devil.” Don’t you think that rather strange? The same Spirit that descended and alighted on him in his baptism just a few verses earlier, now seemingly leading Jesus into temptation? What happened to “Lead us not into temptation”?

It’s interesting that the Greek word used by Matthew can mean either “temptation” or “test”. One commentator remarks, “Apparently, Satan tempts, but God tests.”

About what is Jesus being tested by God? God’s voice had been heard at Jesus’ baptism saying, “This is My Son, the Beloved . . .” In announcing Jesus’ birth, the angel had quoted the prophet who said the name of the young woman would be “Emmanuel, which means God with us.” So, how ready is Jesus to be God’s Beloved, to take on the mission given to him of being the very presence of God in the world? What means would he use to fulfill that mission?

Satan prefaced each temptation with, “If you are the Son of God . . .” How much would Jesus really trust the voice from heaven that proclaimed him the Son? Would he base his life on his God-given identity as the Beloved, or would he try to forge his own identity as a wonder-worker or oriental despot?

Matthew doesn’t describe the struggle that Jesus surely must have experienced in hearing Satan’s temptations. Is something really a temptation if it isn’t somehow within our grasp for the taking, and if it doesn’t involve a sacrifice to deny it?

But in the end, Jesus turned Satan down. He would live out his identity as the Beloved and fulfill his mission, not by pulling out the “God card” as Satan counseled. Instead, he would do the opposite. To be God with us, he had to become human before God, just like us. Paul writes to the Philippians that “though he was in the form of God, he did not regard equality with God a something to be exploited, but emptied himself, taking the form of a servant, being born in human likeness.” He wasn’t going to jump from the parapet of the temple, because flesh and blood doesn’t survive such a jump.

Don’t you find hope in Jesus’ victory over temptation and his passing God’s test? Son of God though he was, Jesus was no different in this respect from you and me. Temptation was as strong, as real, for him as for anyone of us. And being in human form, his power to resist was no greater than ours. Temptation strips all, including even Jesus, of any power of our own to save ourselves. Why else would Jesus teach us to pray for God to deliver us from evil?

Jesus relied on his God-given identity as the Beloved, and on all of God’s promises in Scripture, to pass the test and resist Satan’s tempting offers. All alone out there in the wilderness with Satan, that’s all Jesus had to rely on.

When we face our own temptations, whatever they are, that’s all we have to rely on too. But it will be enough.

Watch the “Marshmallow Test” and have a good laugh! See yourself in it!

Participants might also discuss whether they would eat or wait–and why.

Loving God, in the desert you called our Lord to the way of trust and service, rather than of presumption and power.  You  promised Him your sustaining presence.  Strengthen us in all our temptations, preserving us most of all from despair.  You, who know our weakness, forgive our failings and renew us daily, that our lives may be signs of your care for all creation.  We make our prayer in the name of Him who has walked the way of temptation before us, Jesus Christ our Lord, amen.

Contributed by Scott A. Moore

When have you ever helped someone who was “stuck?”

Preparing a Way for Spirit

The National Aeronautic and Space Administration (NASA) along with Jet Propulsion Laboratories (JPL) and some partners from other countries around the world have been working diligently to find a way out for a stuck Mars rover named Spirit. Spirit has been stuck for over six months now in an area where the ground is made up of very fine, soft sand. The six wheels (one of them has not been working properly for quite a while now) cannot seem to get the traction needed to move forward in any significant way. NASA is not giving up on Spirit, which along with its twin, Opportunity, has continued to function well for five years longer than the originally planned mission of three months. Teams here on earth are working with sample rovers in artificially created environments trying to recreate the actual conditions in order to find the perfect solution…to find a way out. Some of the attempts range from trying various wheel directions and speeds, to having Spirit try to dig itself out with its robotic arms. Just before the Thanksgiving Day weekend, Spirit was commanded to move its wheels forward. NASA indicated that the rover completed a spin which should have equaled a total of 13 feet. The rover actually only moved 0.2 inches forward, 0.1 inches to the left, and 0.1 inches further down into the sand.

(Text links are to oremus Bible Browser. Oremus Bible Browser is not affiliated with or supported by the Evangelical Lutheran Church in America. You can find the calendar of readings for Year C at Lectionary Readings.)

In the sandy Judean desert, a voice communicates a message of action. The word of God comes to John, son of Zechariah and cousin of a man named Jesus of Nazareth. John is called to go and preach a “baptism of repentance for the forgiveness of sins.” The voice of the prophet Isaiah is quoted as the guiding principle of what John is doing. He is preparing the way of the Lord. He is making the Lord’s paths straight. Valleys filled, mountains and hills brought low. Crooked made straight and rough made smooth. He is eliminating every possible barrier between the Lord and the world.

A “baptism of repentance for the forgiveness of sins.” This seems to be the method to remove every barrier. Repentance seems to be the manner of preparing the way of the Lord. Repentance often sounds to us like simply saying sorry. There is certainly an emotional part to repentance but it is much, much more than that. Repentance in the New Testament is based on a word which means “to change one’s mind.” Repentance is seeing things in a new way, turning towards that new way, and living in that new way.  John’s baptism of repentance is a calling, and a gift of God. It is a call to be washed and set on a new path. It is a call to conversion. This call to repentance is a setting of our thoughts and actions in the Lord’s direction. Not only are we to be turned toward him, but we are to be turned to face the same direction our Lord faces.

Repentance means having our minds turned away from ourselves and our often selfish ways and to be shaped by God’s mind. It is seeing the world with God’s eyes. Perceiving and acting in love for the world and for our neighbor.

Being turned in repentance seems like an easy task. John called for a once and for all repentance. Our reality is often much different than that. We are often called by the voice of God to turn in the right direction, but find ourselves stuck and only able to move in tiny increments.  Or, we try so hard to turn ourselves that we overshoot our goal. God is very patient with us. Again and again God calls us to the way. A way of love, a way of sacrifice, a way of Christ.

Our repentance—never perfect, and never permanent—locates us in the central drama of Advent:  preparing the way of the Lord. In the world, and in our real lives. To that we can only say—“Amen. Come, Lord Jesus.”

Preparing the Way of the Lord for Ourselves
Perhaps your group could write some prayers for yourselves and for other individuals in the congregation to pray at home as a preparation for worship. These could be thematic, scriptural, or guided by the church year. See Lutheran Book of Worship (LBW) and Evangelical Lutheran Worship (ELW) for examples.

God of mercy, God of strength. We have so often walked a different path than the one you want us to walk. We need your guidance. Turn our minds to be like yours. Guide our steps. Lead us by your grace. We pray in our Lord Jesus’ name. Amen