What skills necessary to help people in need are among your hidden talents?

Russell just graduated from high school. He motors around in a wheel chair, and some find it difficult to understand his speech. He is a young man with many talents, but most of them are hidden by cerebral palsy. Because his talents are hidden, Russell is often met with expectations that are lower than his gifts. Therefore, to sing, to socialize, to dance, to share a joke, to be a worship leader in church, Russell must often summon the courage to go beyond the expectations of others, which he does with grace. He sings (occasionally solos). He acts in chancel dramas. He socializes before and after worship.

As his pastor, I am most grateful for his gift of caring. He pays attention to who is in church and who is not. If people are missing for too long, he will ask if they are OK. If they are ill, he will ask about them regularly. When they return, he greets them with genuine gladness.

Russell also has brought out the hidden talents of relatives and friends, classmates, and other members of his congregation. Most of them do not think of themselves as people with the natural gifts required for relating to a person with physical and intellectual challenges. Russell has helped them discover that they have the talents necessary to be his friends and companions.

There are many ways to read a parable. Today, try to identify with each character in the parable of the Good Samaritan. Explore whether each character is a part of who you are.

“A man was going down from Jerusalem to Jericho, and fell into the hands of robbers, who stripped him, beat him, and went away, leaving him half dead. Have you ever been a victim of the cruelty of others? Even if you have never been mugged, ask yourself whether you’ve been hurt by others, left feeling vulnerable, discouraged (beaten down emotionally), and without the strength to get up and go. If so, then a part of you is like the man in the parable who was robbed and beaten. If so, you are capable of empathy and compassion for victims of cruelty. 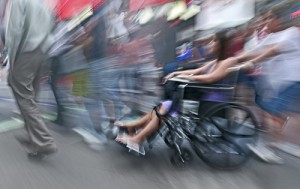 “Now by chance a priest was going down that road; and when he saw him, he passed by on the other side. So likewise a Levite, when he came to the place and saw him, passed by on the other side.”  Have you ever ignored a person in need?  In this world, there are countless people who need our help. Technology and opportunities to travel make them as accessible to us as if they were lying in a ditch by the side of our favorite hiking trail. We can’t help everyone in need, so all of us are passers by – like the priest and Levite in the parable. The story does not tell us why the priest and Levite passed by, but maybe they were busy, had appointments, fainted at the sight of blood, didn’t want to get involved, were afraid the robbers still were lurking. Thinking about why the priest and Levite did not stop might help you identify your reasons for not helping more than you do. Some of your reasons are likely to be legitimate and others are likely to be excuses, ways that you hide your capabilities for helping people in need. Separating legitimate reasons from excuses can be a step towards growing in compassion and generosity.

“But a Samaritan while traveling came near him; and when he saw him, he was moved with pity. He went to him and bandaged his wounds, having poured oil and wine on them. Then he put him on his own animal, brought him to an inn, and took care of him.” Have you ever helped someone in crisis? Have you ever helped someone in crisis who was not the sort of person with whom you usually associate? Samaritans (who thought of themselves as related to Jerusalem Jews) and Jerusalem Jews (who denied that Samaritans were related to them) were suspicious of one another and did not mingle. Since Jesus was telling this parable to Jerusalem Jews, their expectation would have been that the Samaritan would have passed by and the Priest or Levite would have helped. To the Jerusalem Jews, the Good Samaritan’s mercy was a talent hidden behind a negative stereotype of his ethnicity. You can identify with the Good Samaritan if you are willing to reach across the barriers that usually keep people apart (race, economic status, education, sexual orientation, etc.). You can identify with the Good Samaritan if you have the courage and strength to be compassionate in spite of pressures that might lead you to “pass by on the other side.”