What is the biggest house you’ve ever seen?  Describe it. 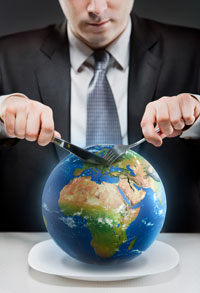 The wealthiest 1% of Americans have 36% of the money.

This, and many other startling facts have come from a recent study conducted at the University of California, Berkeley.  The top 1% is defined as families with incomes above $394,000 in 2012.  The study also shows the income gap between the top 1% and the remaining 99% is as wide as it’s been in nearly 100 years.

The Berkeley study attributes the trend not just to technology and job outsourcing, but to the reduced power of progressive tax policies and unions, along with “changing social norms regarding pay inequality.”  Another study published by the University of California, Santa Cruz indicates that the bottom 80% earn 11% of the money.  As the American economy continues to improve some economists believe the wealthiest people will continue to benefit the most.

Heaven and hell — what’s it like and who’s going there?  These are the questions that have gnawed away at humankind since the beginning of time.  It’s a tough topic for pastors and other religious leaders.  Most religions address the notion of an afterlife, yet people are endlessly curious about the specifics.  Some people claim to have first-hand knowledge of heaven, either through near-death experiences or clairvoyant conversations with people who have died.

The parable of “The Rich Man and Lazarus” addresses the concept of the afterlife in terms of wealth and poverty.  The nameless rich man lives a life of luxury while poor Lazarus is lying destitute at the rich man’s gate begging for table scraps.  Only the dogs pitied Lazarus, which gives us the unpleasant image of open sores being licked by stray animals.  Both men die.  Lazarus is whisked away to the bosom of Abraham while the rich man is being consumed in the flames of Hades.

There is tough justice for the rich man.  There is no “get out of Hades free” card for him.  The rich man is being punished because he disregards Lazarus as being less than him.  Even in hellish agony the rich man wants Lazarus to be his errand boy.  He asks for Lazarus to give him water or warn his family about their impending doom.  However, Abraham (functioning as the God-figure) won’t permit it.  The story is about more than rich vs. poor, it’s about seeing all people as beloved children of God.

Beware of reading this story too literally, lest we see it as a simple condemnation of the super-wealthy.  We who are among the 99% might get a little cocky about ourselves while heaping coals on the rich.  Martin Luther reminds us that there’s more going on here:

“Therefore we conclude that the bosom of Abraham signifies nothing else than the Word of God,…. the hell here mentioned cannot be the true hell that will begin on the day of judgment. For the corpse of the rich man is without doubt not in hell, but buried in the earth; it must however be a place where the soul can be and has no peace, and it cannot be corporeal. Therefore it seems to me, this hell is the conscience, which is without faith and without the Word of God, in which the soul is buried and held until the day of judgment, when they are cast down body and soul into the true and real hell.”

The complexity of this parable is confounding to many, especially young people who may desire a clear interpretation.  It’s good to wrestle with this text and pray for clarity.  In the meantime, let us be encouraged to free others and ourselves from the bondage of wealth and seek to reach out in love to those in need.

God, we grieve the inequalities in our world.  Help us to be agents of change and ambassadors of love.  Thank you for loving us.  Amen.