Warm-up Question: How do you react when you think something is unfair?

College football season is in full swing. As with any group, some student athletes choose to break the rules set by their coaches or their leagues. Coaches must then give out punishments including suspensions, counseling, and extra hard practices.

Early in the season is the biggest time for suspensions. Colleges have had to discipline players for many different infractions, including failing drug tests, not going to classes, cheating in their classes, and even being arrested on charges like DUI or assault. 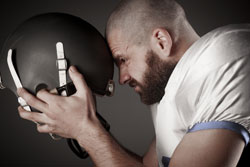 Many different factors determine the punishments players receive. Former Texas coach Mack Brown describes it this way: “You’ve got to be consistently fair with your rules, understanding that there are so many inconsistent things that are thrown at you.” Brown once had three of his players get DUIs during one off-season. He disciplined them differently because two of the players had been causing trouble for a while, but the third had never broken a rule before.

Former Auburn coach Gene Chizik tells why he thinks the same offense may not always be punished the same way: “If the team knows you’re fair, you’re good. You want to be as consistent as you can be, but consistency is not always doable. Fairness can be.”

Houston Nutt, who coached at Arkansas and Mississippi, learned this philosophy playing at Arkansas under his coach, Jimmy Johnson: “Players who rarely if ever step out of line get leeway and second chances. Problem children don’t.”

Nutt also said coaches must take into consideration that their discipline measures might hurt the team, which may in turn put the coach’s job in jeopardy. It’s not an easy position for a coach to be in, since they are paid to win games.

Nutt once suspended his starting kicker for getting a DUI after Nutt had warned the players not to party before the game. The team lost the important game, and two weeks later the DUI charges were dropped. It was frustrating, but Nutt felt justified in suspending him.

“You have no respect for your team and coaches,” he told the player.

Punishments may not always look fair to observers, but sometimes the message can be communicated by what seems like a mild consequence. As Florida coach Will Muschamp said when he was criticized for reinstating players after suspending them from a game that was cancelled after ten minutes, “There are a lot of things that go into discipline. It’s about altering and changing behavior, which we’ve done here.”

If you grew up going to church, you’ve probably heard the words of Matthew 20:16 before. You may have even heard them so often that they get on your nerves. They may have been used to make you feel guilty for rushing to be first in line, or as a consolation for being last. Your siblings may have thrown these words at you to compensate for their own feelings that they were being treated unfairly.

“The last will be first, and the first will be last.”

In all of history, only Jesus teaches such radical unfairness. Only Jesus possesses the grace to give those who worked for one hour the same wage as those who worked all day. How wonderful for those who received a full day’s pay for only an hour’s labor. May we all have been this fortunate at one time or another in our lives.

What about those who worked all day? Shouldn’t they get more? This is where our sense of unfairness kicks in. It just feels wrong to work all day and get paid no more than those who worked one hour. What a sour feeling to think you were first, and end up being last.

Some believers don’t think this is fair. “I have believed and served God all my life,” they think. “I should get more than the person who lives a sinful life and only repents on at the very end of his life.”

In this parable, as in all his teachings, Jesus shows us that it isn’t about our efforts, how long we are a Christian or how great a Christian we are. Instead, we need to focus on God’s grace, which is the same for all, because we all need it equally. If we want to be truthful, none of us deserve God’s grace and forgiveness. “For all have sinned and fall short of the glory of God” (Romans 3:23). Although some of us are Christians just about all our lives, and some only come to faith very late in life, our need for salvation is exactly equal. This is the truth Jesus portrayed so well in this parable.

As a group, find an opportunity to serve a person or a group of people in need. Serving others is a way to put them first. Some ideas are providing a meal at a soup kitchen, raking leaves for someone, washing their car, etc. Afterward, discuss how it felt to serve in that way.

Dear Lord, thank you for your grace in forgiving us when we couldn’t do anything to deserve it. Thank you for the example of your justice in the world. Help us to be gracious toward others and willing to put them before ourselves. In the name of Jesus we pray, Amen.