Are you excited about the beginning of the school year and the competition it brings?  Yes or no and why?

USA Today—The air is getting crisp and some of the trees are showing signs of changing color.  Fall is in the air and the high school boys’ football rankings have been released.  You can find them at the following link:

Also, the Division 3 men’s football rankings are out and they include several of our ELCA colleges and universities.  This link can be found on the D3 website: 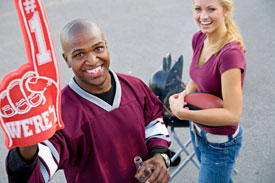 The beginning of school brings the beginning of various forms of competition.  Not a football fan?  There is the debate team, the chess team, the dance team, not to mention the competition for the best GPA.  I chose football because in most communities the interest in competition goes beyond the high school or college and involves the entire city/town/village.  There is within us a desire to be associated with winners and so we want our teams to be number one (I still look online to see how my high school is fairing and I have season tickets to my college football team even though I graduated years ago).

Competition teaches us some valuable lessons about working together and contributing to the team effort.  It sharpens our critical thinking skills and our physical skills.  Those things contribute to school spirit and a greater sense of community.

However, the drive to be number one can tempt us down paths not so morally upright.  There have been scandals in the Little League boy’s World Series and just recently in the girl’s Little League Softball World Series.  Every now and then we hear of a test cheating scandal at the high school and college levels.  And no matter how you feel about quarterback Tom Brady someone deflated those footballs to give the New England Patriots an advantage in competition.

Ever wonder why the Bible never mentions Jesus’ childhood?  There is a rather large gap between Luke 2:21 where Jesus is brought to the Temple eight days after his birth as tradition demanded and Luke 2:43 where we are told Jesus is twelve years old.  What happened during those 12 years, nobody knows as the Bible is silent on the issue.  One might guess from the tradition of first century society that we don’t hear about Jesus’ childhood because children were “invisible” to the adults until that time children became an adult at around age 12.  It is hard for us to understand that fact given our society places a value on children (we don’t do it perfectly, but as a whole we value children by what we say and what we do…such as requiring car seats for children, labeling games with warnings about possible chocking hazards, and having height requirements for amusement park rides).  But, if we are to understand the meaning of today’s gospel text we have to try our best to read this story through the lens of those first century folks. More on this in a moment but first:

Today’s gospel has three parts.  First, Jesus makes a second announcement of his coming suffering and death.  After the first announcement (Mark 8:31) Peter stepped forward and rebuked Jesus because in Peter’s view the Messiah should not die at the hands of humans.  This time we are told that the disciples “did not understand what he was saying and were afraid to ask him” (v. 32).  The Bible doesn’t tell us but maybe they were still wrestling with what it would mean for the Savior of the world to die at the hands of humans.  (If you wish to know, Jesus makes a third announcement in Mark 10:32-33).

That issue is dropped and they continue their walk to Capernaum to the house where they will be staying.  Once there Jesus asks the disciples what they were arguing about on the way.  The disciples are ashamed because they had been arguing about who was the greatest among their group.  Jesus knows this and calls them to his side.  Notice that Mark tells us that Jesus “sat down”.  That is a move a teacher would make when about to teach something important.  Once seated, Jesus does not yell at them but simple teaches by saying “Whoever wants to be first must be last of all and servant of all.”  Jesus is teaching the disciples that the ways of the Kingdom of God are different from the ways of the world.  In the Kingdom of God Jesus will lay down his life for everyone and even the world out of mercy and love.  In the Kingdom of God service to others is valued more than being number one.  Take a moment at this point and read the words of James in our second reading (James 3:13-4:3, 7-8a).  It seems that even the most faithful followers of Jesus have problems getting this straight.  Because of that we shouldn’t beat up on ourselves or others if we put ambition and being number one ahead of our call to service and love.  We should simply read today’s gospel text again, ask for God’s forgiveness and for the strength of the Holy Spirit to set out again as disciples of Jesus showing forth the values of the Kingdom of God in word and deed.

Finally, in the third part of today’s gospel, Jesus illustrates what he is teaching by taking a little child into his arms and saying “Whoever welcomes one such child in my name welcomes me, and whoever welcomes me welcomes not me but the one who sent me”.  We might hear this story and sigh “Ah” at its sweetness or we may ignore it because it seems so sugary but remember that we want to look at this text through the eyes of the disciples and those first century folks.  They would have been thinking “whoa” because it was a very radical move and an even more radical statement.  But this is how serious Jesus is about our servanthood to all people, not just to people like us, not just to people we like, but to all.

Power, success and winning are not bad things in and of themselves but over the centuries they have been strong temptations to serve oneself first and ignore the needs of those right around the corner.  Over the centuries many have fallen into that temptation and things did not end well.  However there have also been powerful, successful Christian disciples who have used the gifts God gave them to serve their communities and others in the world.

Sportswriter Henry Grantland Rice wrote: “When the Great Recorder comes to mark against your name, he marks not if you won or lost, but how you played the game.”  Of course that is not the conventional wisdom of our day.  In our society most agree with former great football coach Vince Lombardi who once said ‘Winning isn’t everything, it’s the ONLY thing.”  Opposed to that conventional wisdom there has been for many years a group of voices who advocate for noncompetitive games.  Check out the website below, choose a game, play it and then discuss how it made you all feel.  Did you enjoy it or do you prefer to have a game be competitive?

For our closing prayer today I offer you a prayer from Brennan Manning, a Franciscan priest, theologian and writer:

May all your expectations be frustrated, may all your plans be thwarted, may all your desires be withered into nothingness, that you may experience the powerlessness and poverty of a child and sing and dance in the love of God who is Father, Son and Spirit.  And today on planet Earth, may you experience the wonder and beauty of yourself as God’s child and temple of the Holy Spirit through Jesus Christ our Lord.  Amen.