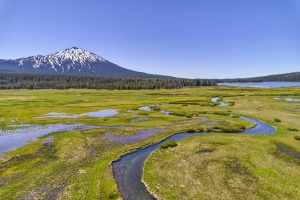 Many physical places serve as a transition between two other spaces. In locations where outdoor temperatures can be frigid, some homes have a vestibule, which is an enclosed entryway that serves as a buffer between the warm interior and the cold exterior. (In South Carolina, with its moderately warm winters, I have never seen a vestibule in a home.) Architects and other designers will often refer to transitional zones as “liminal spaces,” which means being at the threshold of something new but not quite there yet.

In nature, a common transition is the riparian zone. This is the space that has land on one side and water on the other; think of the space where cattails and inland sea oats naturally grow at the edge of bodies of water. These zones have many benefits: filtering water, curbing encroaching floods, preventing erosion, and providing the most suitable habitat for many amphibians and insects to thrive. When the riparian edge is eliminated (e.g. a neighborhood pond that has lawns up to the edge of water), the results are typically less wildlife, unclean water with algae blooms, and erosion.

Recently a federal judge approved an agreement among several interested parties in Arizona because unmitigated cattle grazing “devastated streamside habitats across the Southwest and pushed a lot of vulnerable plants and animals closer to extinction,” said Chris Bugbee, an advocate at the Center for Biological Diversity.

Now consider the transitions around borders. I was raised in a city on the border between West Virginia and Ohio. It was common for adults to live on one side and work on the other, I had friends and activities on both sides, and there was a common culture that was uniquely both Appalachian (WV) and Midwestern (OH). Often the areas alongside national borders are referred to as borderlands. In these transition zones, it is common to find the exchange of goods, employment, languages, and cultures from one side to the other. When the border becomes “harder,” these exchanges are reduced, in both human and ecological terms.

The gospel reading tells us that Jesus is traveling through the region between Samaria and Galilee while on his way to Jerusalem. [Locate this region on a map in the back of a Bible, or by searching online, “1st Century Palestine map.”] Borders often designate, from the perspective of a particular group, what is considered safe and what is forbidden. Jesus is in a borderland.  It’s difficult to distinguish between the two sides. Perhaps that is why these ten men with leprosy are located here: neither side wants them. So they are in this borderland, although this space socially isolates them and economically relegates them to meager living.

The leprosy discussed in the Bible is a catch-all term for any number of skin ailments. Some of these ailments are contagious after long exposure, but some cannot be passed to other people. Regardless, once someone was labeled a leper, they were removed from the community out of fear, though caring individuals would periodically visit or offer supplies.

Yet it is in this borderland, a forbidden zone that neither Samaria nor Galilee desires, that Jesus does something special: he makes it holy. By bringing healing to those ten men, Jesus allows them to return and be fully engaged in their communities. This borderland that once symbolized their hopelessness becomes the symbol of God’s action.

The story ends with one of the ten – a Samaritan – returning to Jesus to give thanks. To be honest, if I were in their position, the first thing I would likely do is bolt to my loved ones to embrace them. Yet this one Samaritan returns to Jesus, and Jesus points out that there were nine others. He then tells the one, “Get up and go on your way; your faith has made you well.”

One clear takeaway is that we should give thanks to God, but I believe this lesson has more to say than that. First, it tells us that people on both sides of a border bear the image of God. Second, the story shows us how God is often revealed in places of human hopelessness. Combining all this, we see that God is at work in the borderlands, among all people, often bringing hope where they have lost hope, doing so regardless of whether they stop to give thanks. That is because love is the nature of God.

Situate yourselves into a circle and designate a spot that will be like the 12 at the top of the clock. That spot is January 1, and moving clockwise around the clock are the days of the year, finishing with December 31 next to January 1. Without talking, have the group get in order by the date of their birth (the year doesn’t matter). Once in position, everyone can speak to determine how well the group did.

Have everyone note who is to their right (if introductions need to be made, please do so). Then – perhaps writing it down – have everyone think of something that they give thanks to God for about the person to their right. Share your affirmations.

Loving God, you encounter us in places that we often think are off-limits to love. Yet, it is in those places that your love sprouts new life and hope. Help us to acknowledge that love and to give thanks to you. Amen.