This week’s Faith Lens examines a sensitive issue.  Before having a group discussion, please review the section “Productive Discussion in a Spirit of Mutual Respect” on pages 5-6 of the ELCA study Journey Together Faithfully, Part 2: 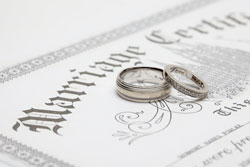 Do you want to be married someday?  Why or why not?

Marriage and the Gospel

This past June, the Supreme Court of the United States made a landmark and controversial decision to extend the legal right of marriage to same-sex couples.  The 5-4 decision, accompanied by strong dissent, sparked passionate reaction nationwide from objectors and supporters alike.  A county clerk in Kentucky has become a celebrity after being arrested for civil disobedience, refusing to comply with the new law on religious grounds, while other people of faith joyfully embrace the new freedom.  At the heart of the issue is the definition of marriage, a question not directly addressed by the U.S. Constitution.

Those on both sides of the issue can find in this week’s gospel lesson support for their position.  Opponents of same-sex marriage point to Jesus’ citation of Genesis, which clearly, explicitly identifies the conjugal union of male and female as God’s design.  Proponents see Jesus consistently acting as a champion of those denied rights, power, and dignity in a patriarchal context where men had rights that women did not have (including the right to initiate divorce) and as a defender of committed, loving union.  Jesus does not specifically address the possibility of same-sex marriage; his silence on a question he was not asked is interpreted very differently by his present-day followers.

Almost all of us who read the Bible are at least somewhat guilty of looking for it to support what we already believe rather than allowing it to challenge our opinions and to reshape the way we think.  The latter is what Jesus is trying to accomplish with both the Pharisees and his disciples.  The Pharisees ask, “Is it lawful for a man to divorce his wife?” Jesus moves the conversation from the legality of divorce to God’s intention for marriage—from a legal loophole to a sacred covenant.  He next chastises his disciples for trying to separate him from children, “for it is to such as these that the kingdom of God belongs.”  He elevates the value of children for his disciples in the same way he elevates the value of women for the male Pharisees (and later the disciples).  In both cases, he shifts the focus from separating people toward bringing them together.

Beneath all this is Mark’s broader story.  The Pharisees are testing Jesus because they are done with him.  Since marital breakdown was the undoing of John the Baptist (Mk 6:17-18), maybe the issue will work with Jesus too.  They are really looking for a way to write a certificate of dismissal and to divorce him!  Their strategy backfires.  Their divorce from Jesus—the cross—is transformed into the altar where the union of God and humanity is saved and secured forever.

God our creator, our experience and understanding of you is limited and varies widely.  Draw and hold us together.  Teach us how to appreciate one another’s perspectives without compromising our convictions.  Move us from separation to healthy relationship with you and one another in the name and Spirit of the one who loves, challenges, restores, blesses, and unites us all, Jesus Christ, our Savior and Lord.  Amen