What does it mean to be a leader?

Jeb Bush, Bernie Sanders, Donald Trump, Ben Carson, Hillary Clinton and many others jostle for recognition to become their party’s candidate in the next presidential election. The election is just under a year away, yet the debates, character defamation, accusations, and campaigning began months ago.  Compare this to Canada’s recent election where Prime Minister Justin Trudeau campaigned for 78 days before winning. 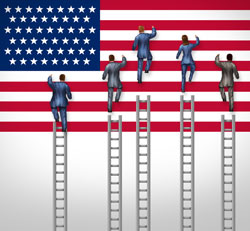 At this point in the United States it seems you can’t turn on your television, look through Facebook, or listen to the radio without hearing opinions, perspectives, and commercials campaigning for one candidate or another. Because the next President will be the leader of the free world in our time, we should take this important decision seriously. Yet, at the same time, the discernment process can be overwhelming for an American citizen.

The text for Christ the King Sunday depicts an interesting event in Jesus’ life and ministry. It begs us to ask the question, “Who reigns?” Jesus is caught in a battle between the Jewish leaders and the Roman Pontius Pilate.  Prior to our assigned text, we find the backstory. The Jewish leaders don’t want to be accountable for Jesus’ death so they hand him over to Pilate, the Roman official responsible for the region. Pilate tries to pass Jesus back to the Jewish leaders saying, “Take him and judge him according to your laws.”   But they resist and demand Pilate’s judgment because they want Jesus put to death, something permitted under Roman but not Jewish law.

Here’s where we can look at the authorities of the time. Pilate asks Jesus an interesting question, “Are you the king of the Jews?”  He is questioning if Jesus has authority here on this earth over this minor group of people in the region for which Pilate is responsible. Jesus replies with a question and doesn’t really answer Pilate. Instead, Jesus explains how his kingdom is not from this world.  Jesus’ kingdom is brought through the truth.  His rule is a different kind of authority, made apparent through his coming crucifixion.

Today, as during Roman times, people often become kings or rulers by conquering and winning battles.  Yet, Jesus shows that his kingdom is one that acts very differently. It manifests itself in the crucifixion, in the taking away of our sins.  It provides us freedom and reconciliation with God, as opposed to resting on dominance.

Check out some of the candidates’ YouTube sites; look specifically at the ones created by the candidates.  Process with youth how the candidates say they will lead.  How does this compare with how Christ is king? Where are the paradoxes?

Blessed Savior, We are grateful today. Thank you for the reminder of where your kingdom is and who the ruler is. Help us to grow in our discernment of our earthly leaders and how we can serve those around us.  Give us the strength to listen to your calling in our lives.  In your name we pray.  Amen.