According to Wikipedia, politics, from the Greek politika (“affairs of the city”), is the set of activities associated with making decisions in groups, or other forms of power relations among individuals, such as the distribution of resources or status. It’s jarring to see such a definition because politics is currently far from what it was intended to be. 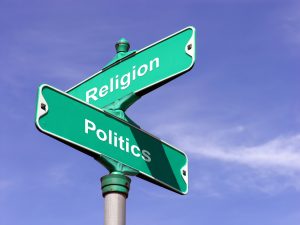 At home we see the political parties in the United States determined to tear one another down for the sake of promoting their agendas.  Across the world dictators and greed-stricken leaders, driven by the insatiable thirst for power, disregard the well-being and humanity of their people.  Politics has lost its original meaning. Today, politics has less to do with leaders coming together to figure out how to adequately distribute resources.  It is more about how one side can portray who and what they have power over.

Because many people around the world have only seen and lived through the ugliest political economies, they truly believe that it’s simply the way things ought to be. Thus, when given the chance to lead, they often fall into the very patterns they detest.

Many would say faith is deeply personal, and thus has no place in politics. But as the radical feminist Carol Hanisch wrote, “the personal is political.” Jesus, who is the center of our faith, would agree. Everything Jesus did—the disciples he chose; the people he healed, fed, and engaged in dialogue—were acts of redistributing resources and status. Jesus was unapologetic about his politics.  On the cross, he publicly forgives his accusers and executioners, saying, “Father, forgive theme for they know not what they do.”  And he pardons the thief crucified beside him, saying “Today, you will be with me in paradise.”

Though Jesus is no longer physically with us, we carry on God’s politics when we do as Jesus did, mirroring his life and seeking the reign of God here and now.  Our faith is always deeply political.  It reflects our values—and our values guide our actions in the world. Christ is our King, and in his kingdom there is no hierarchy.  All are welcomed and transformed.

Two teams will run a relay to the hats, put a hat on and run back to their team member, who will then run down to the pile of hats for their team and put on another hat. This will continue until all the hats for each team have been put on and everyone is back on their team line. When their team is done, they will all say together JESUS CHRIST IS KING!! Teacher, make sure that there is a CROWN in your pile of “hats” to go along with today’s story!

Jesus and the Superheroes Game:

Christ, you are the sovereign of all he world, including every element of our lives.  Rule our hearts, that every  value, action, attitude, and choice may be pleasing to you.  Come, Lord Jesus, that your will may indeed be fully done on earth as it is in heaven.