Have you ever experienced a natural disaster or severe storm?  Were you frightened?

On April 25th, 2015, a major earthquake rocked the mountainous nation of Nepal.  With a magnitude of 7.8, this earthquake was the most violent natural disaster to hit Nepal in 81 years.  At least 8,259 people died in the quake, and nearly 20,000 people were injured when the buildings around them came crashing down. 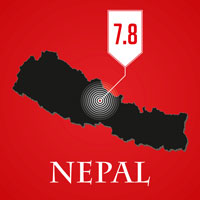 Australian Camille Thomas was in the village of Langtang when the earthquake began.  When the Australian Associated Press interviewed Camille, she labored to explain how terrifying the experience was.  “It was pretty scary, pretty horrible, nothing you can really explain,” she said. “We ran and hid under some stuff and it all started coming down.  Snow and rocks and houses, everything.  An avalanche.”

Though Camille made it to safety, many others did not.  In the days following the earthquake, Nepalese men and women, with the help of the Nepalese army, began digging through the rubble, hoping desperately to find survivors buried beneath.

Miraculously, a few survivors appeared.  Sonies Aawal, a five-month-old baby, was among the first reported miracle survivors, pulled out of the wreckage 22 hours after the quake to the relief of his parents.  A 15-year-old boy named Pemba was buried in rubble for a full five days before being pulled out.  Astonishingly, Pemba was not the last survivor found.  A 101-year-old man by the name of Funchu Tamang was dug out a week after the earthquake.  Tamang had only suffered minor injuries in the quake.

The survivors are incredibly lucky, but they certainly experienced days of uncertainty and fear, buried in the darkness, unsure if help was coming.  Pemba spent so long in the darkness prior to his rescue that he admitted, “I did not know if I was alive or dead.”

We rejoin Jesus and his disciples as Jesus offers his final teachings following the Last Supper.  After he finishes speaking, Jesus and the disciples will go to the Garden of Gethsemane.  The disciples may not know it yet, but they are about to experience a situation in which they will feel helpless and alone.

The disciples had learned to rely on Jesus.  Sometimes that was a hard and frightening lesson to learn, as when Jesus calmed the storm that had the disciples terrified and fearing for their lives.  Sometimes it was simply miraculous and humbling, as when Jesus caused four loaves and two fish to feed a multitude.  By this time, though, the disciples were getting it.  Jesus was not only their rabbi (their teacher) but also their Rock and their Shelter.

Jesus knew, of course, that the disciples would struggle with his death and his ascension into heaven.  After learning to rely on Jesus in a very real way, would the disciples feel abandoned and alone when they didn’t have Jesus physically by their side?  Certainly, we can relate to this.  Haven’t we all felt alone sometimes?  Have you ever wanted Jesus to be physically beside you?

Fortunately, Jesus has some comforting news for us.  As scary as the idea of Jesus’ departure is to the disciples, He tells them, “It is to your advantage that I go away…”

By His death, resurrection, and ascension into Heaven, Jesus is preparing the world for the coming of the Holy Spirit, which He calls “the Advocate” in this passage.  The term “advocate” is a powerful choice of title.  An advocate is one who fights for a cause – one who cares deeply and passionately and who works tirelessly on behalf of another.  The Spirit of God, Jesus says, is our Advocate!

This is the simple truth that makes the rest of the story of our Christian faith so powerful.  After Jesus ascends into heaven, His followers receive the Spirit of God to be their strength, to teach them to have faith, and to fill them with hope and love. As we read about the miracles of Peter and Paul in the book of Acts or read Paul’s letters to the churches of Europe and Asia, we should keep in mind that the same Spirit of God that gave these early disciples strength and faith has been given to us as well.  We, too, can open ourselves up to be filled with God’s Spirit!

We may never experience something quite as traumatic as Pemba did, being trapped under rubble for days.  However, we will all experience times of loneliness or worry.  It is at those times that we should remember that we have the most powerful Advocate the world will ever know – the Spirit of God through Jesus!

As a group, plan a “pep rally”.  Instead of focusing on school spirit, though, focus on the Holy Spirit!  Some members of your group might paint banners, some might come up with cheers or chants, and so on.  The themes will be hope, advocacy, and strength. (If you can, invite younger groups of Sunday School classes to join you in your pep rally!)

Heavenly Father, through the death, resurrection, and ascension of your Son, you have entrusted us with the precious gift of your Holy Spirit.  Help us to always treasure this gift, relying on your strength and power whenever we feel powerless or alone.  Teach us to spread this gift of your Spirit to our community and our world, so that all of your children know what a powerful Advocate they have.  In the name of Jesus we pray, Amen.