Who are the people you trust most? 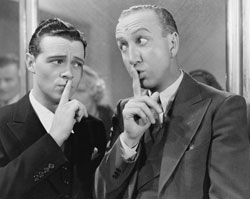 The effort to keep those who know too much quiet is a common theme in books, television, and movies. From gangster movies to Cold War spy novels to fantasy dramas, secrets must be kept at any cost. The stories get very dramatic based on the lengths to which the “bad guys” go to keep the witnesses from telling the secret. In Alfred Hitchcock’s 1934 aptly-titled movie “The Man Who Knew Too Much,” a girl is kidnapped to keep her parents from revealing an upcoming plot.

One of the biggest book and television phenomena of recent years has been the HBO series “Game of Thrones,” based on the books by George R.R. Martin. In the very first episode of this series, a young boy, Bran Stark sees something powerful people don’t want him to see. In order to keep him quiet, he is thrown from a castle tower. He does not die as his silencers hoped, but he is paralyzed and cannot remember the events leading up to his fall. Many of the events of the series that follows stem from this incident, from the attempt to keep the secret that Bran saw and to find out what really happened to him on that tower.

The raising of Lazarus was not a secret. Many people knew about it. People had been there to watch him die; people had helped to bury him, and then they talked with him after Jesus raised him from the dead. But still, Jesus’ opponents thought that perhaps they could make it a secret once again. They plotted to kill Lazarus to stop people from talking about how he had been raised from the dead.

Lazarus was not killed by these opponents, at least as far as we know from the biblical record. And his story is still told 2000 years later. But even if he had been killed, his story would have been told. Some things just cannot stay secret. The life and hope that Jesus brings to the world cannot be kept secret. Even if Lazarus had been killed, even if all those who had seen him had been killed, the gospel light overpowers darkness.

Make a poster that shows how Jesus has touched the lives of your youth group. Post it in your church to tell the story. Don’t keep it secret.

Good and gracious God, help us not to keep your life and love a secret. Help us to tell the story with boldness and love. Amen.