Is it ever permissible for citizens to disobey their country’s laws? If so, when and why?

It started in Canada. They called it the Freedom Convoy. Truckers driving in a convoy (a line of trucks all traveling in the same direction) began a noisy, horn-honking, but originally peaceful protest against the government’s requirement of COVID vaccinations for workers. 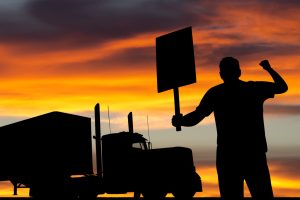 As time went on the protests became increasingly disruptive: truck blockades in Ottawa, Ontario preventing people from getting to work; obstruction of the main border crossing into the U.S. interrupting deliveries of goods; protestors placing their own children between themselves and the police. Finally, Canadian president Justin Trudeau, for the first time in Canadian history, declared the enforcement of emergency laws that give the government extended powers in a national crisis.

Other countries joined in. Paris police broke up protests on the city’s famous central thoroughfare the Champs-Élysées with tear gas. Officials in Wellington, New Zealand, tried to discourage protestors by playing the music of Barry Manilow.  Demonstrators countered with Twisted Sister song “We’re Not Gonna Take It.”

The protestors claim  the right not to obey government rules they consider oppressive. But do people have the right to endanger others who want to be protected from disease or disrupt the lives of ordinary citizens to publicize what is probably a lost cause? According to an article on the political website Vox (meaning “voice”), the majority of Canadians say “no.” The protestors, says the article, are a raucous minority, upset because they have lost the anti-vax battle.

Have these protests been put down completely? Will these difficult examples discourage others from staging legitimate protests? Only time will tell.

The writer of Hebrews tells us that Jesus “has been tempted in all things as we are, yet without sin.” Well, of course, we might think. He was God. How hard can it be for God to resist temptation? But look carefully at the Gospel passage.

First, Jesus has been fasting for 40 days. His body is weak and desperately hungry. Second, he has been led by the Holy Spirit, who so gloriously filled him at his baptism, into the desolate wilderness. During all this time, he has no human company, no outside comfort or help. And then Satan shows up.

So, what does Jesus do? Does he suddenly surround himself with blinding light and literally tell the Devil to go to hell? No, he uses only the resources we have: the Word of God and the power of the Holy Spirit.

“Cool,” thinks Satan, “This is going to be a piece of cake. Let’s start with hunger, the greatest human need. Turn the stones to bread. You have the right to a little comfort. Go ahead! Do it!”

Jesus responds, “It is written: ‘Man shall not live on bread alone.’”

“Okay, how about this. See all those kingdoms down there? Why settle for tiny little Israel? Worship me, and the right to rule it all will be yours!

“It is written: ‘Worship the Lord your God and serve him only.’”

Satan is nearly at the end of his rope. “Hmmm. ‘It is written…’ Aha! If he can quote scripture, so can I! Hey, Jesus, do you really think this whole humility thing is going to get anybody’s attention? You need to show off who you really are. Jump off the temple roof! After all it is written…”

“Do not put the Lord your God to the test!”

And that’s it. Satan could not get Jesus to claim his rights as God or use his heavenly power for himself. Jesus wins, not by claiming his rights, but by humbling himself, limiting himself, completely identifying with human beings.

Americans consider our rights sacred and so they are. But following the example of our Lord Jesus is more sacred yet. The day may come when you will have to give up some of your rights, as Jesus did, to serve others. Ask him to help you practice humility now, and you will have the same strength he had when the time comes.

Almighty God, how can we thank and praise you enough for sending your Son to be one of us?  Setting aside his power and privilege, he lived as a humble servant, and died a criminal’s death,  to save unworthy sinners. We give thanks that though he is risen and exalted in heaven, he is yet with us through the Holy Spirit, who gives us power to resist sin. Keep us ever humble, ever willing to serve, and ever devoted to our Lord and Savior. In his blessed name we pray.  Amen.