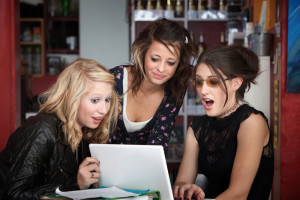 It’s hard to open up your social media account or YouTube without seeing a political advertisement these days. Political conversations get incredibly messy during this time of year, especially the year before a presidential election. By messy I mean it’s hard to figure out who is telling the truth about a certain issue. Candidates start to point out flaws in the other person’s stance or position rather than explain their own. That makes it even more difficult to figure out because hardly anyone is presenting their own position! They’re just trying to present their opponent in a negative light in order to gain favor with the popular vote. On a more local level, have any of you had experience with this?

It’s teenage social sorting 101. Put other people down, point out their flaws and you become “popular.” At least, that appears to be what’s happening. Rather than just trying to win a popularity contest, people are being put on trial for being different or not fitting in to the usual social norms. They are tried and convicted for no other reason than they don’t look or act like “everybody” else, whatever that means. People say untrue things about us mainly to build themselves up on a false foundation. Paul mentions gossip right away in his book to the Romans. Proverbs 21:24 says, “Mockers are proud and haughty; they act with boundless arrogance.” If we put other people on trial, that means only one thing: we’re only looking out for ourselves.

Sunday of the Passion

Luke 23:1-49
(Text links are to Oremus Bible Browser. Oremus Bible Browser is not affiliated with or supported by the Evangelical Lutheran Church in America. You can find the calendar of readings for Year B at Lectionary Readings
For lectionary humor and insight, check the weekly comic Agnus Day.

In our Gospel text, Jesus is put on trial as well. His own disciples deny him. The religious elite tell half truths about who Jesus says he is, and the people in political power have Jesus put to death by crucifixion. It’s an ugly, terrible scene, one that is at the core of the Christian witness: That Jesus was crucified, died and was buried. There are days when it feels like we have been put on trial, and that everyone has abandoned us. We suffer pain, rejection, ridicule and shame, all because of what people perceive as differences among us.

In our political realm, it seems that the differences are what divide us. When the opposite is most certainly true. It is in our differences that we find wholeness. It is in our differences that we discover a deeper connection with all that is around us. There is a way to look at the world that doesn’t see it as all a threat. One of the many things that set Jesus apart was his ability to see God’s presence in those who were outcast, rejected and abandoned. He was so willing to embrace the unembraceable that those sheer acts of hospitality were an offense to those in power and control. It was one of the things that got him killed.

However, we do know that the suffering and death of Jesus is not the whole story. Jesus doesn’t simply stay in the tomb, he comes back. Humanity gave Jesus the worst possible thing that was available at the time, and it wasn’t enough to keep Jesus down. It wasn’t enough to keep God from continuing to love us.

Heavenly Father, we reach out to you in times of thanks and in times of distress. Help us to trust always in your grace and never-failing love for us, the love that will always give us peace and set us free. Amen.