How do you tell the difference between the truth and a lie? 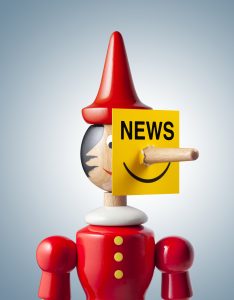 Post-truth is an adjective defined as “relating to or denoting circumstances in which objective facts are less influential in shaping public opinion than appeals to emotion and personal belief.”  In 2016, “Post-truth” was Oxford Dictionaries’ Word of the Year.   In a July 2017 article by Lausanne Global Analysis, the term “post-truth” is closely linked with another popular phrase of our time, “fake news.”

Some fake news is generated with a specific agenda, but, as stated in the 2017 Lausanne article, a lot of fake news is simply a matter of careless, unverified reporting, or malicious attempts of greedy people to gain money and power through reporting of fake news on social media, thus generating ad money and attention globally.  Additionally, a 2016 survey by Pew Research Center states that 23% of people have shared fake news, either knowingly or not.  And let’s face it; that was four years ago.  What might the percentage be in today’s social media reports?

There are a number of psychological reasons why people believe and share fake news.  First, in today’s social media culture, people have the tendency to share and like posts that have more likes and shares.  Closely related to the definition of post-truth, people also tend to share posts that move them emotionally rather than those that contain objective information.  And finally, people are much more likely to believe news, even if it’s fake, if the news aligns with their previously held world-view or ideas.

While some people propose that fake news is spread more rapidly because of what are called “bots” on the internet, research studies conducted and published between 2016-2018 showed that fake news is much more likely to spread by human cause, and that truth has a much less significant rate of sharing and spreading; usually less than 1,000 people are reached with truth, compared to 1,000-100,000 people with fake news.

So what does this mean for Christians seeking to learn about the world around them?  And how does this relate to today’s Bible texts?  First, people have always been curious and have always been confronted with new experiences and new information.  Second, while fake news  may now be a little easier to create and spread due to the speed of internet and social media, fake news is not a new thing.  In fact, as we see in our Bible text today, even Jesus is tempted with fake news which comes from a place of truth but gets twisted. Even the temptation of Adam and Eve occurs as a result of the devil manipulating words to imply truth which really isn’t the truth at all.

Temptation is and has always been a large part of human existence, hasn’t it?  From the Old Testament lesson in Genesis on the temptation of Adam and Eve in the garden, to the temptation of Jesus by the devil in the gospel text for this week, to the regular temptations we face in our everyday life, there always seems to be a way that temptation tries to get the best of us.  Jesus even teaches us in the Lord’s Prayer to ask for God’s help in avoiding temptation!  The challenging thing about temptation is that it often disguises itself as truth, or part truth, when in fact temptation is really fake news–the lie that something else is more important than God’s love for us or the love we have for others.

Let’s take a look at the Old Testament reading and Gospel reading for this week.  First, in Genesis, the sneaky serpent takes the words that God commands and turns them into a lie that seems true…in other words, fake news.  Adam and Eve have been told by God that they can eat of ANY tree in the garden except one; the tree of knowledge of good and evil, and that if they eat from this tree they will die.  Then the serpent  begins tempting them by asking a negative question; “Did God say, ‘You shall not eat from any tree in the garden’?”  Already, the tempter is trying to paint a negative picture of God’s words.

Of course when someone starts with a question that gets you thinking about what you can’t do, you are going to hear the rest of the story in a different way!  Then, the snake tells them that the real reason God doesn’t want them to eat from the tree of knowledge of good and evil is to keep them from being as knowledgeable as God.  The snake turns the truth, that they will die, into something that seems more desirable by telling them that they will be as knowledgeable as God.

In the Gospel reading from Matthew, the devil uses words from the Old Testament, in two cases, almost direct quotes.  But, again, as with the fake news in Genesis, the truth is found in the meaning behind the words.  God gives us the promises in Old Testament scripture as signs of God’s faithfulness, comfort, and love, whereas the devil uses them to tempt Jesus into showing power and testing God.  Jesus shrewdly answers the devil with scripture as well; reminding the devil of the true meaning behind the scriptures.  What we see, however, in both stories, is the devil using fake news or post-truth to try and draw us from God and the life and love God promises.

So, what are the devils or temptations in our own lives today that draw us away from the freedom, love, and life that God promises us?  Perhaps the fake news for us is found most readily in the form of advertisements and marketing that tell us we need certain products to live a fabulous life or be better people. We are told we need these things to be more beautiful or handsome, “cooler” or more accepted and appreciated.  Another daily temptation is to post things on social media whether or not they are true, so that we can gain more attention and power.  Maybe the temptation to give in to convenience lies to us and tells us we can do more, when really, the more we add to our lives, the less time we have for what is most important…God, our families, friends and other loved ones, and caring for our neighbors.

Today’s Gospel helps us to understand in a world of post-truth that temptation is really fake news.  As people of God, we are given the assurance of love, acceptance, belonging, forgiveness, mercy, and unconditional grace.  These we are called to share with all people.  As we combat the reality of “fake news” in our world—the lies that people tell about others and the world, the lies we tell ourselves, and the temptations which draw us away from loving and living freely—are called to face temptation and tempters with words similar to those used by Jesus. We confess our love and trust in God, so that we don’t test God, but live fully in reliance on God’s truth and faithfulness, even in the wilderness of life.

Play the game “Two Truths and a Lie”.  Have each person in your group tell two truths about themselves and one lie.  As a group, try to determine what they said that is a lie.  What is hard about figuring out the truth?  What helps you to know what is truth and what is a lie?

Holy God, as we enter the season of Lent and a time of repentance and reflection, help us to be aware of all the temptation around us and to find the truth in the midst of the lies.  Help us to know the truth about ourselves and keep us from spreading fake news in the world.  Amen.