How do you know that you belong in a community? What are the signs from a community that indicate you might not belong there? 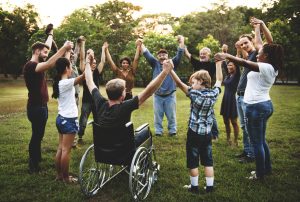 Recent research about Gen Z from the Springtide Research Institute suggests that a combination of three things leads to young people, aged 13-25,  feeling like they belong in school: being noticed, named, and known by a community. Paying attention to someone, noticing  rather than ignoring them, increases that person’s sense of connectedness. Greeting someone, holding the door for them, blessing them after a sneeze—all are simple ways to notice.

Naming someone accurately, as well as  using the pronouns they’ve asked you to use, deepens that connection. Think of the way that positive nicknames function to increase community. In sports, people called me “Tuck,” short for my last name. My grandfather affectionately called me “Drewser.”  These namings showed me I was not just noticed, but appreciated.

The Springtide research refers to the third dimension, being known, as “unreserved acceptance.” Even more than being noticed and named, being known in  a community gives reassurance. This might happen when I recall details a Gen Z student shared with me, or  trust them to use their passions to contribute to the community’s work.

There are some troubling statistics in this work.  72% of male participants felt most adults openly supported them at school.  Only 66% of female participants and 51% of nonbinary participants felt that way. In other words, half of nonbinary students don’t feel like they belong, and more that a quarter of male and female students agree. Further, only 18% of all respondents felt safe enough to talk about things that matter most to them at school, and even fewer Black or African American students, 11%, felt safe enough to do so.

Clearly, we have holy work to do in our schools to notice, name, and know Gen Z students.

Much happened on that first Pentecost after Jesus’ resurrection from the dead and ascension into heaven. Most notably, tongues of fire appear upon the disciples heads. I’m sure that must have been a startling sight! Just as surprising, though, was the gift of speaking different languages, also called tongues. Clearly the Holy Spirit has a sense of humor. People from all over the Roman empire arrive in Jerusalem for the festival.  They bring their native languages and expect to hear only Greek (the empire’s common language), along with Aramaic and Hebrew (the local languages of Jerusalem at the time). Instead, far from their home, they hear a message of good news in the language most familiar to their hearts.

The Book of Acts  doesn’t say the listeners felt like they belonged.  It says they were “amazed and perplexed.” They didn’t expect to hear Judeans speaking languages common to minority peoples throughout the empire. In this short story, they’re noticed by the disciples, named by the author, and known with words that speak directly to their experience. Rather than requiring a translation, the good news comes to them naturally, through the supernatural work of the Holy Spirit.

We can’t force the miracle of tongues.  That’s God’s work. But this sign of the Holy Spirit reveals a divine priority we can practice.  We can do the hard work of translating the good news into the lived experience of those we encounter, rather than forcing them to adapt to our ways. In fact, we should do that. Our work—how we worship, how we preach, how we teach, what we study, who we invite, where we budget funds to be spent—should be shaped by the people God calls us to serve. Disciples unwilling to speak the language of other nations would have done the gospel no good on that first Pentecost. Similarly, a ministry unwilling to adapt in order to meet the needs of the people God brings to them refuses the work of the Spirit in their midst.

God of Welcome, send a spirit of generosity upon your people. When we resist giving up things that no longer serve your good news, soften our hearts in ways which open us to your mission. Inspire us to adapt to the people you bring into our lives, so that all know they belong to your beloved community. We pray this in the just and merciful name of Jesus: Amen.