Have you ever felt like someone close to you did not truly understand you? 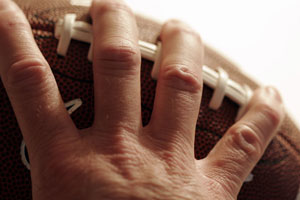 Although he was a shining star to many football fans a year ago, Tim Tebow spent the 2012 season with the New York Jets as a second-string quarterback.  In addition, Coach Rex Ryan chose to play the third-string quarterback over him when the starting quarterback, Mark Sanchez, was taken out of the game against the San Diego Chargers on December 23.  On top of that, it is unclear whether Tebow refused the opportunity to play in a wildcat offensive formation during the game.  In a later article, Tebow reported that the conversation with his coach was misinterpreted.  He simply asked for the opportunity to play his favorite position, quarterback, though he was willing to do anything for the team.

An article by Greg Couch on FoxSports.com describes Tim Tebow’s situation.  Couch writes that, in his opinion, Tebow’s coach used him for the quarterback’s image and popularity without giving him a chance or intending to play him much. Similarly, Couch stated that Tebow’s previous coach on the Broncos called the wrong plays, trying to expose Tebow’s weaknesses to his adoring fans.  Instead, Tebow found success and helped lead the team to the playoffs.

Couch describes Tim Tebow as a man who simply wants to be a good person and play football, but many others do not accept his approach.  People have viewed him as hypocritical, attention-seeking, selfish, and not having what it takes to play in the NFL.  After the mix-up at the Chargers game, many onlookers bashed his character and criticized him, saying that he “quit on his team”.

Greg Couch offers some closing thoughts on this possibility:

‘Here’s hoping Jacksonville sees him as a man and not a stunt or political statement.  After his college greatness at Florida, though, you wonder what they’ll see him as, football player or incredible ticket-seller. Fans there will pressure coaches more than they did in Denver.  At least Tebow knows what to watch for. He is learning.”

Sometimes our “home” environment or hometown becomes the very place that fails to fully understand us.

In this passage, Jesus returns to Nazareth, his hometown, and goes to the regular weekly service in the synagogue on the Sabbath day.  I compare this to our weekly church services.  He followed Jewish customs, which included being the reader and teacher of the (Old Testament) prophets’ writings in the scrolls on occasion.  Jesus, however, was not just any other weekly Bible reader.  Because Jesus is God in human form, He spoke the prophet Isaiah’s words with power and proclaimed that these words of prophecy came true through Him that very day!  That is amazing news.  Hundreds of years after God spoke to the man Isaiah about the coming Messiah, Jesus Himself humbly goes to the synagogue as usual, but He shares with the people that He is in fact the One to come and set the captives free, open the eyes of the blind, preach good news to the poor, and announce the year of the Lord’s favor.  Verses 20-21 explain His extraordinary reading of the familiar text which captured everyone’s attention.

However, people in Jesus’ hometown did not fully understand His purpose.  The heading of this passage in some Bibles is “Jesus Rejected at Nazareth”, so the meaning can be partially missed if we do not read the rest of the section through verse 30.  Luke writes that “everyone praised him” (15) and “All spoke well of him and were amazed at the gracious words that came from his lips” (22).  But this is followed by, “‘isn’t this Joseph’s son?’” (22B).

Jesus goes on to describe how the old prophets Elijah and Elisha were sent to other places to do God’s work, because the people in their hometown, Israel, would not truly accept God as the source of the healings at those times.  “No prophet is accepted in his hometown” (24).

When Elijah visits a widow in Zarephath during a famine, asks for food, prays to God, and raises her son from the dead, she proclaims, “‘Now I know that you are a man of God and that the word of the Lord from your mouth is the truth’” (1 Kings 17:(7-23), 24).  Similarly, Naaman, an army commander from Aram who had leprosy, had servants who trusted in the prophets of God in Israel.  Elisha told him to wash in the Jordan River seven times to be cleansed, and when it worked, Naaman proclaimed, “‘Now I know that there is no God in all the world except in Israel’” (2 Kings 5:15).

However, the people in Jesus’ home ground in the Nazareth synagogue only claimed, “Isn’t this Joseph’s son?”  I think this message is exemplified more clearly in the version of the same story in Matthew’s Gospel.  I encourage you to look up Matthew 13:53-58.  He states the people’s reaction this way:

“‘Where did this man get this wisdom and these miraculous powers?’ they asked.  ‘Isn’t this the carpenter’s son?  Isn’t his mother’s name Mary, and aren’t his brothers James, Joseph, Simon and Judas?  Aren’t all his sisters with us?  Where then did this man get all these things?’  And they took offense at him.  But Jesus said to them, ‘Only in his hometown and in his own house is a prophet without honor.’  And he did not do many miracles there because of their lack of faith” (Matthew 13:54b-58).

Since the people in the synagogue of Christ’s hometown saw Him grow up, as any average kid would, they did not accept that God was the source of His power and authority.  They did not recognize Him as God or respond in faith like the outside peoples healed by Elijah and Elisha did.  Even though they were amazed, they were skeptical that “Joseph’s boy” was growing up to be great.  They could not open their eyes to see that God, His true Father, was working through Him with an authority and power that was out of this world.

Can you imagine returning home like Jesus did, only to find that no one really understands who you are?  He wasn’t just another Nazarene; He was God!  Maybe this relates to how Tim Tebow may have felt when his coach viewed him only as a popular icon, when he wanted to be a godly football player.

Have you ever felt this way?  Maybe you went on a life-changing trip that truly opened your eyes to another people’s culture, but when you try to explain it to your loved ones at home, no one fully appreciates the experience.  Maybe you feel that your own parents do not even comprehend what you are going through.  Maybe you worked at a Bible Camp all summer and grew really close to God and experienced His power and love in miraculous ways, but your friends back at home think you are weird or do not want to hear about it.  To you, these things make up part of who you are, but others won’t try to see it from your perspective.

Take hope that Jesus went through the same thing, and He understands you and loves you perfectly, no matter where you are.  And one more piece of food for thought: the next time someone else tries to tell you something really cool they experienced that may seem to be of no interest to you, take the time to listen and see if you can begin to understand his or her perspective so he/she too does not feel unaccepted.

Jesus, we love you so much.  Thank You for first loving us and for revealing to us how much you can relate to our struggles, like not feeling like we belong, at times.  We believe that you walk beside us through all the days of our lives, and you understand us perfectly, better than we even understand ourselves!  We trust that you will provide the true home for us, and we ask that you empower us to relate to other people who need an understanding friend.  Make us more like you every day, Lord.  In your holy and precious name, Amen!