What was the last thing you bought? Where did you buy it from (online or in person)? What was the shopping experience like?

A November 2019 article represents a collaboration between The Atlantic and Reveal from the Center for Investigative Reporting. It tells a handful of different stories of Amazon Warehouse employees being injured, and in one case even killed, on the job.  The article argues that most the injuries were either due to lack of safety training or overemphasis on efficiency. It blames Amazon’s “obsession with speed” for having “turned its warehouses into injury mills.” 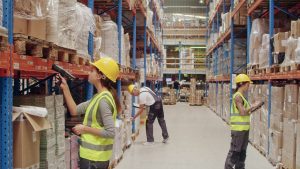 As consumers have gotten used to the perks of a Prime membership, the company has made steps to make the shopping experience even better; this past holiday season, certain purchases came with guaranteed one-day free shipping.  Of course, that translates to more work in Amazon’s warehouses and even stricter deadlines and quotas for workers.

The Amazon spokesperson who provided written comments for the article says that the reason that Amazon’s work-related injury statistics are higher than the industry standard is that they are extra diligent about reporting all injuries. However, employees, who remained anonymous for the article, and a former OSHA employee, who investigated the fatal accident at an Amazon warehouse in Indiana, tell a different story.

After John’s arrest, Jesus begins his public ministry in Galilee.  While quoting Isaiah 9:1-2, the Gospel of Matthew refers to that place as “Galilee of the Gentiles” (Matthew 4:5, NRSV).  During Isaiah’s time, that region was ruled by a foreign power—Assyria—and during Jesus’ time, it was ruled by a foreign power—Rome.  In both cases, these Gentile empires caused the locals to live in a “shadow of death” (Matthew 4:16, NRSV). As Biblical commentator, Warren Carter, puts it—”Roman imperial structures and practices were bad for people’s health.”

The Roman’s Empire’s demands on local laborers to provide food for the empire and to pay taxes, led many to live in poverty and with the resulting poor health.  Carter suggests this is why there were so many people with disease and sickness seeking healing from Jesus as he began his ministry.

Jesus’ ministry is one of ending current imperial oppression and instituting God’s reign, which is marked by new work (v. 18-20), new family/community (v. 21-22), and a new chance at life (v. 23).  When he proclaims in verse 17 that “the kingdom of heaven has come near,” he is saying that Rome is not ultimately in charge—GOD IS! With his acts of healing, he works to counteract the damage that imperial greed causes.

Gracious God, thank you for loving us and giving us new life.  Be with all those who daily feel the oppression of modern-day empire. Help us to see your kingdom come near and be part of Jesus’ work of shining your light and love into the world. Amen.