Imagine that you have an enemy – one who taunts you, puts you down, who may even be plotting to kill you. Then you get a phone call. This person is in terrible, life-threatening trouble and you are the only one who can help. Would you go to the rescue? 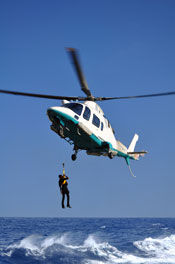 That scenario is close to what really happened in the waters of the Persian Gulf off the coast of Iran. A group of Iranian fishermen had been taken hostage by Somali pirates. The kidnappers were using the fishermen’s boat as a floating headquarters for their illegal activities. After forty days, the Iranian captain managed to get to the pirates’ radio. He pleaded for help in Urdu, a Pakistani language his captors did not know.

The call was picked up by an American Navy destroyer, the USS Kidd, which had recently been reprimanded for its presence in Iranian waters. In spite of the language barrier they figured out that someone needed help and they didn’t stop to ask who. In an action worthy of an old war movie, a helicopter launched from the Navy ship rescued the 13 Iranians and took 15 pirates into custody.

U.S Naval officers on board fed the former hostages, made sure they were in good health and released them – wearing USS Kidd baseball caps.

It is doubtful that this heroic act will do much to improve U.S./Iran relations. While one Iranian spokesperson expressed gratitude for the “humanitarian gesture,” another dismissed it as a “publicity stunt.”

Mark 1:14-20
(Text links are to Oremus Bible Browser. Oremus Bible Browser is not affiliated with or supported by the Evangelical Lutheran Church in America. You can find the calendar of readings for Year C at Lectionary Readings.)
For lectionary humor and insight, check the weekly comic Agnus Day.

So there were Peter, Andrew, and the Zebedee brothers, on the job mending their fishing nets, as usual. Along comes a stranger. They have probably seen him before. Other encounters are recorded in other gospels. But this time is different. He does not say hello or ask how they are doing.

He says, “Follow me and I will make you fish for people.”

What? We’re supposed to leave behind our father’s prosperous business (notice they have hired workers), and follow this – whoever-he-is to wherever it is he’s going?

It was not unusual in that day for a Jewish person to follow a rabbi. It was a little like going to college. You “sat at the feet” of a wise teacher (often literally) and learned the wisdom of the Scriptures. That is, you did if you were the son of a Pharisee or a priest, the upper class of the day. But ordinary fishermen follow a rabbi? Why? How would that help them to catch more fish? It would be like Jesus walking into a car repair shop and telling the mechanics, “Follow me and I will make you fix people.” The first question would be “Why?” and then “Why me?” And then maybe “What’s in it for me?”

But Jesus is saying, “I have a job for you, one much more important than the one you have now. I want you to come and learn from me and prepare. Now you will work for MY Father. Follow me.”

And they did. These were men of action. They jumped up, left behind the nets and the boats and their coworkers and off they went with Jesus. He called them and they answered. How odd this sounds to us!

We have to look at the verses that come before this passage to find out why. In verse 15 Jesus says, “The time is fulfilled and the Kingdom of God has come near.” The reason is simply that it’s time. Jesus’ mission has begun. You are to share in it. Come.

When the crew of the USS Kidd was called, they came. There was an important job to do.  Because they did it, lives were saved.

Jesus has a job for us to do as well. We are to share in his mission, spread his Gospel, let others know that he is The One who saves us from sin and death. If we do, lives will be saved. It’s time. Come.

Go back to the last question. Write “This week I will show Christ to my world by___” on the board or chart paper. Write down students’ suggestions. Have each person take a slip of paper and write down one of the suggestions or one of his/her own. Have a time of silent prayer for the courage and power to take the action listed. Close with a spoken prayer. Remind the class to pray for each other during the week.

Suggested songs: “Stand Up, Stand Up for Jesus,” ” Be Thou My Vision,”  “Rescue the Perishing”

God of our salvation, Prepare our hearts, minds and spirits for the time of action. Inspire us to do the work you have for us with courage and love. May we follow you willingly, loyally, and eternally. In Our Savior’s Holy Name,  we pray.  Amen.