Share a story from a wedding you attended? Extra points for heart warming, amazing or face-palm worthy.​

Wedding ceremonies and celebrations are a beautiful mix of private and public. At its simplest, a wedding requires an officiant (clergy, clerk, judge, justice of the peace, ship’s captain), the couple getting married, and witnesses. Couples have been married in hospital rooms, canoes and a replica Tardis (see Dr. Who). A wedding can be simple, stress free, affordable and private. The shenanigans multiply as the once private wedding becomes a public event – maybe even a public spectacle. 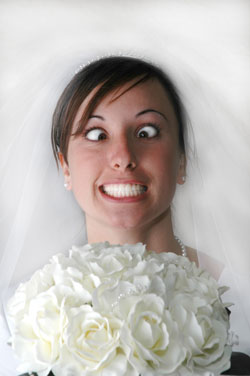 Entertainment Tonight and the tabloids blast the details of celebrity weddings in the same way ESPN broadcasts playoff scores. A small, private wedding in Hollywood is nearly impossible. Some were private ceremonies; others were lavish galas, besieged by buzzing helicopters. Heaven help the celebrity marriage that crashes and burns. Break-ups get more invasive coverage. There is always a headline about private details in the checkout line.

Better pray that you don’t end up with your wedding on America’s Funniest Home Videos. You might get lucky and have Maroon 5 use your wedding for a video shoot. You can watch My Big Fat Gypsy Wedding, Bridezillas, Four Weddings, My Teenage Wedding . . . I am a survivor of a failed marriage that began with a wedding worthy of reality TV. My forever marriage is getting close to its 6th anniversary and began with a wonderful wedding full of stories worthy of telling the grandkids and not being broadcast on cable. That’s how it should be.

I asked my extended community to submit real – and brief – stories from their weddings that did not make the tabloids. Enjoy the amusing wedding stories from non-celebrities.

Edith—When my cousin got married, her husband said “I do” every time the priest paused to breathe… At least five times.

Peggy—When choosing the date for your wedding the second time around, make sure you clear it with your future partner first…..it may just be the same date that she married Mr. Wrong!

Linny—My dad looked at me as we were about to go down the aisle and said, “If you don’t want to do this, we could always go take over a third world country instead…”

Lori—Try to encourage guests to NOT fill the bridal couple’s vehicle with sawdust until the horn honks interrupting the receiving line…. Thankfully it was my sister’s wedding and not ours.

Sarah—I started crying at our wedding the moment I saw my Dad waiting to walk me down and proceeded to cry throughout the ceremony. The first opportunity my groom had to say anything to me was during the lighting if the unity candle, when he whispered “suck it up. SUCK IT UP!”

Heather—When the grandfather of the groom was being escorted down the aisle, he says very loudly, “Where in the hell are we sitting? I am three sheets to the wind, so I don’t know.”

Timothy—A friend of mine was getting married. The bride chose the opening of deer hunting as the date for their wedding. The groom, an avid hunter, questioned that choice. The bride said, “But wouldn’t you give up deer hunting just this once so that we can get married?” He said, “Of course I would give it up this once. But are you going to want to spend every anniversary thereafter alone?” They got married January 1 instead.

Liz—My favorite thing about going to a wedding with Ruth is when they do the unity candle she whispers under her breathe….Don’t blow your individual ones out. Keep and shine together as well.

John—While still in college, with a couple of weeks to go before the end of the semester, the bride and groom got married. In attendance were a few of their professors. In the greeting line, one professor congratulated them both and said, “Will I be seeing you in class now that you’re married.”

Ruth—I was in my brother’s wedding, standing on the bride’s side (for this wedding). It was July in Rock Island, IL, and fricking HOT. My Dad and his BFF/brother’s Godfather were officiating the wedding. I was wearing something close to a spaghetti strap type dress, and I could feel the sweat running down my back in material that had never heard the word breathe. When sweat started rolling down my face, I took the occasion to blow on a sweat bead, which sailed upwards towards the Pastors right at the moment my Dad looked towards me….and I got THE LOOK.

Traci—We had to delay our rehearsal because someone had just knocked off the bank down the street and fled on foot. Police were searching the church. Good times!

La Vonne—My husband to be and I planned a small wedding. I shopped for my dress and found a cocktail dress that was nice but it had a tie that was supposed to make a knot over the front bodice of the dress. On my wedding day, I wore my dress backswards, intentionally deciding that it looked much better with the bow in the back and a square neckline in the front.

As I was dressing for the day, I realized that I had forgotten SHOES! My friend canvassed the dormitory and found one girl that had a pair of white pumps, size 10 that I could borrow. Having a size 8 myself and having not worn heels much, I struggled and almost came right out of the shoes as I knelt down during the service….

Suzy—We did communion at my wedding, but at the rehearsal dinner we hadn’t actually talked about what you say when you are doling out the bread and wine … I drew a total blank and panicked…luckily my dad was one of the first to come up for communion so I secretly asked him what to say when people dipped the wafer…I found out later that the man I married, however, was gleefully telling the guests in his line, “One dip only!”

Kathy—The Lutheran chaplain at KI Sawyer AFB who married us told us we’d be lucky to last three weeks. I guess we took it as a challenge since we celebrated our 50th anniversary last year. Wish he were still alive so we could tell him!

Amy—We got married in rural WI and the tuxes were delivered via UPS…all except my husband’s tie! The groomsmen had ties of another color, but the groom and the ring bearer had the same color (silver). We called the company and they sent a tie express – 4 hours. It was time to take photos! So what did we do? The groom wore the 3-year-old ring bearer’s elastic, slip on tie! It was super long for a 3-year-old and short for the groom – but he buttoned his coat and no one was the wiser. His tie DID arrive in time for the ceremony!

Wilma—This bride and groom were married on a very cold June Day. It was so cold they had to wear topcoats! It was during the war years when there was rationing of many items including tires, gas, & food. The honeymoon was a single night at the Cedar Rapids Roosevelt Hotel. When we got there and unpacked, I realized I had forgotten my comb. I asked my new husband if he had remembered his……well he was a bald as a cue ball! As he unpacked his clothes, we saw that his pajama bottoms were sewed shut with big red buttons. Oh well, we got home to our little rented house and found that we had no lights in the bedroom and our bed had been short-sheeted by some practical jokers. But one of our best gifts was a 2-quart jar of sugar!

We forget that the Wedding at Cana is not just about Jesus’ first miracle. It is a story about hospitality. Running out of wine was a serious disaster!

The rules of hospitality in the ancient Middle East were a serious matter. Hosts were obligated to give travelers a place to stay, food, water and have a servant wash the guest’s feet.

The traveler was required to accept all that the host offered – refusal was an insult. Host and guest would share a meal as a token of friendship. Hosts would even offer their daughters to an angry mob to protect the guests; remember the story of Lot and the angels.

Ancient wedding customs added more layers to the hospitality rules. Marriages were arranged, and had a long betrothal. A friend of the groom would chaperone the bride during the betrothal. The ceremony was held at the groom’s family home and would LAST SEVEN DAYS. Yes, seven days. Guests were given new clothes to wear, entertained, fed and given wine. Running out of wine was a serious infraction of custom and ritual. Running out of wine was a blemish on the groom’s family and was a horrible omen for the new couple.

Jesus’ miracle saved a family from embarrassment. They could again be hospitable.

Dear blessed parent, please help us to be more hospitable in our celebrations and daily lives. Help us to give generously and accept comfort and assistance. In your name we pray. Amen