What political figures (living or dead) do you admire?  What characteristics about them do you find to be admirable?Public

2018 has come to a close.  At the end of the year we tend to look back at all that has happened and remember those who have passed away during that year.  In the last year, two of the people mourned by our nation have been prominent political figures: John McCain and George H.W. Bush.

After John McCain succumbed to cancer in August, former President Barack Obama delivered a stirring eulogy for him.  In this eulogy, Obama commended the former Senator, saying that McCain had “concluded that the only way to really make his mark on the world is to commit to something bigger than yourself.”  In the same speech, the crowd chuckled along as Obama, a former political rival of McCain, referenced the latter’s famously short temper and animated personality.

Likewise, following President Bush’s death in November, a eulogy by Presidential historian Jon Meacham celebrated Bush’s legacy with a simple statement: “An imperfect man, he left us a more perfect union.”  While making humorous references to some of Bush’s most notorious verbal gaffes, Meacham also celebrated Bush’s humility and self-proclaimed goal of working for all Americans.

Both Senator McCain and President Bush had prepared for their deaths beforehand, asking Obama and Meacham to speak at their respective funerals.  They knew that they were asking men who knew their flaws, as well as their strengths, to speak on their behalf.  However, these statesmen were also honest about their flaws during their lifetimes.  Their eulogies became a last testament to this humility and integrity.

Baptism of Our Lord 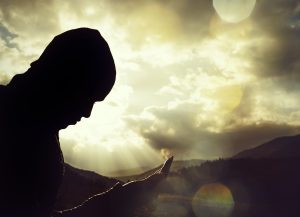 In today’s Gospel reading we are treated to an incredibly powerful lesson in humility and service.  Two of the most prominent figures in the Gospels, Jesus and John the Baptist, demonstrate the great importance of humility when it comes to reaching those around them.

In the first part of today’s reading, we find John in his position as a fiery preacher and prophet, proclaiming the coming kingdom of God.  John’s powerful words and fierce sincerity have earned him a vast following.  Yet even in front of the hundreds of people who have come to him for guidance and salvation, John makes a startlingly humble statement.  “One who is more powerful than I is coming,” John said. “I am not worthy to untie the thong of his sandals.”

This simple statement is a powerful witness by John.  Rather than seeking fame, John admits his limitations.  Rather than use his position as a public figure to raise his status, John humbles himself.  This is an incredible moment, one which truly helps prepare the way for Jesus.  By using his position of prominence to humble himself, he prepares the crowd for the pure majesty of the coming of God in the form of Jesus.

Jesus does arrive, and John proclaims Jesus to be the man who he had been speaking about – the Lamb of God.  But our lesson in humility isn’t over.  For months, John had been traveling through the region, proclaiming that it was necessary for everyone to repent and be purified of their sins through baptism with water.

When Jesus, the one about whom John has been speaking, arrives, what does he do?  Does he immediately begin to tell the crowd what to do?  Does he take over the baptisms himself?  Does he sign autographs and wave at his new fans?  No, Jesus steps into the water and has John baptize him as well.

But why?  We know that Jesus did not sin, and he was not in need of purification.  Why would the savior of all humankind, the perfect Lamb of God, submit to a purification ritual for the sinful and imperfect?

We have only one conclusion: Jesus humbled himself in this way to serve us.  By bringing himself down to our level, Jesus became able to serve and teach us in our own world.  It was the humility and gentleness of our Savior that made him a powerful force for good in the world.  It was this humility that brought to him people that had been marginalized and ignored by the rich and powerful.  By stepping into the water for baptism, Jesus stepped down to our level, showing that he was the guide and redeemer of the outsiders, the oppressed, and the outcast.

How do we know that this was such a powerful act?  Because the sky opened, following Jesus’ baptism, the Holy Spirit descended upon Jesus, and the air rang out with the commanding voice of God: “You are my Son, my Beloved; with you I am well pleased.”

Heavenly God, you humbled yourself to walk among us, your imperfect people.  We are so grateful to you for bringing yourself down to us, so that we would not have to walk alone.  Help us to humble ourselves after your example.  Teach us to thrive in service through others, and grant us the peace that we pass onto others.  In the name of Jesus we pray, Amen.