Have you ever read an interesting autobiography? What made this person’s life unique?

At the dawn of 2018, the Mountain Journal online magazine introduced a year-long series written by a man named Steven Fuller, who is a “winterkeeper” at Yellowstone National Park. During the warm months, winterkeepers do general upkeep for the park’s buildings that are used by the thousands of summer tourists. During the cold months, each winterkeeper lives in complete solitude while ensuring those same buildings don’t collapse under the weight of snow. The winterkeepers may need to trek miles between the buildings they are tasked to maintain. 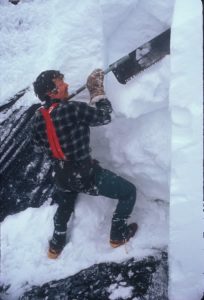 It is treacherous and dangerous work; mistakes can be deadly because no help is available. Wilderness survival skills are a must. Because it is such a solitary and demanding job, most winterkeepers last for a season or two. Steven Fuller, however, has 45 years as a winterkeeper under his belt. This is the longest tenure in the park’s history. These decades have allowed Fuller to grow intimately close to the ecosystem where he stewards, and the solitude has allowed him to ponder the great questions of life.

The Mountain Journal has asked Fuller to share his thoughts and photographs with its readers over the course of 2018. The series of journal entries is titled A Life in Wonderland, and thus far it has included accounts of bison meandering onto his front porch and ruminations on the geological beauty of Hayden Valley. Although more is to come in this year-long encounter with Fuller, the reader can tell already that his words and worldview have been shaped by the wild places around him, much like Henry David Thoreau, Aldo Leopold, and Rachel Carson before him. It is exciting to know that more of Fuller’s writings are to come and that his life’s work is ongoing.

Transfiguration of Our Lord

The lesson today is the story of the transfiguration of Jesus, found at the middle of Mark’s gospel narrative. Jesus is joined by the disciples Peter, James, and John on top of a mountain when his clothes become a dazzling white and he is joined by Moses and Elijah. The disciples don’t know what to make of this. Verse 6 says that Peter’s offer to make three dwellings was spoken from a sense of terror. The transfiguration concludes when a cloud surrounds them and a voice says, “This is my Son, the Beloved; listen to him!”

Once before this, a voice spoke similar words. At the beginning of Mark’s gospel, a voice from heaven said at Jesus’ baptism, “You are my Son, the Beloved; with you I am well pleased.” (Mark 1:11) Notice that Mark implies that only Jesus heard the voice that declared him to be the Son of God. Why did the voice not tell others that Jesus is the Son of God? Later at Jesus’ transfiguration, three disciples hear the declaration that Jesus is God’s Son, yet at the end of this story Jesus orders them to tell no one else until after he has risen from the dead. (Mark 9:9) Why should they wait to tell others that Jesus is the Son of God? Finally, near the end of Mark’s gospel, we read of the death of Jesus. He gave a loud cry and breathed his last breath, and at this moment a Roman centurion said, “Truly this man was God’s Son!” (Mark 15:39)

There is a progression in Mark’s gospel. It is a progression of the growing number of people who hear the declaration that Jesus is God’s Son. First only Jesus hears the proclamation at the Jordan River, then at the transfiguration of Jesus only a few disciples hear this, and finally it takes the crucifixion for someone other than the divine voice to declare openly that Jesus is God’s Son.

Mark’s gospel is also a progression in the sense that we must wait for the true nature of the Son of God to be fully revealed. Jesus’ baptism and transfiguration begin to reveal it to us. However, the baptism is only the beginning of the story and the transfiguration is only the middle of it. As the voice on the mountain said, we must continue to “listen to him” after this event, for his story continues. As glorious as Jesus may have looked on that mountain, we must not think that the Son’s true nature is fully revealed at his transfiguration. Ultimately, Mark’s progression informs us that if we desire to see the true nature of God’s Son, then we must look not only at his baptism, nor only at his transfiguration. That full revealing of the Son’s true nature must include the cross.

At the Transfiguration, the disciples are reminded that this event wasn’t the end of the story; more was to come and they needed to continue to listen to Jesus. A fun activity about a story’s continuation and about our listening skills is called The Team Story Game. To play this game, work with teams between three and eight people.

One person starts a story with a sentence that begins with “Once upon a time…” Then the next person says one sentence that continues the story. This practice continues through the whole team. Small teams might want to agree to two or three rounds before the story concludes, and larger teams might decide to wrap up the story after each person has contributed only once. Rotate who begins each new story.

Loving God, you led Jesus and his companions up the mountain for his transfiguration, and there you commanded the companions to listen to him. Open our ears and our hearts to listen to him always, and may we be attentive to the cross as we prepare to embark on our Lenten journey. Amen.