Who are some of the people who have had a positive influence on your life?  What was it about them that was so meaningful to you?

A Time for Leadership

On Friday, January 25, President Trump signed a bill temporarily re-opening the federal government after a partial shutdown.  The 35-day shutdown – the longest yet in U.S. history – not only dominated recent news headlines but has negatively impacted the lives of many in our country, most especially the 800,000 federal workers who were either furloughed or required to work without being paid.  Initial estimates by the Congressional Budget Office indicate that the permanent cost to the U.S. Economy will be around $3 billion.

Leadership will figure heavily in the days ahead when it comes to how, or if, this issue will be resolved.  Congressional leaders have until February 15 to reach a compromise on the Republicans request billions of dollars to be allocated for a border wall which, up until this point, Democrats have refused to fund.  Failure on the part of these leaders to work together to successfully navigate competing priorities and the current political landscape could potentially lead to another shutdown. 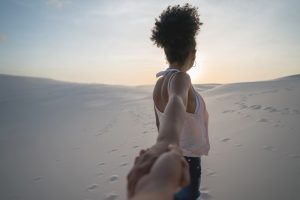 Recently, my wife and I celebrated our wedding anniversary.  Like most everyone we know, we had no idea exactly what we were getting into when we said, “I do.”  We only knew that from that moment on our lives would never be the same.  There would be new demands and challenges, new joys and surprises, and a journey together filled with moments we’d never even dreamed of.  I wonder if, somehow, Simon Peter and the other fishermen-turned-disciples of Jesus didn’t also feel the same.

We are by the Lake of Gennesaret this week, also known as the Sea of Galilee.  Jesus’ teaching, preaching, and acts of power have begun to draw large crowds.  People are pressing in on him, so, making the most of the geography and the water’s effect of providing natural amplification, Jesus has a couple of local fishermen, including one Simon, take him out in their boat.  What did Jesus say to the crowd?  Were the fishermen hanging on his every word?  Luke doesn’t say.  Yet, whatever their experience of Jesus, it must have made an impression because, despite their knowing better, they follow his next request to put out into the deep water and let their nets down for a catch.

Now just imagine the scene.  Simon Peter is initially reluctant to even bother because he knows that this isn’t the right time of day for fishing.  Not only that, but, when Jesus first showed up, they were right in the middle of cleaning their equipment after a long, fruitless night of catching nothing. What Jesus’ asks seems pointless, but perhaps we are meant to hear echoes of other stories Luke has already told about the intersection of human impossibility and divine power, stories like that of Mary and of Zechariah and Elizabeth.  For, in their obedience to Jesus’ word, Simon and his partners find themselves knee deep in such a huge catch of fish that their boats begin to sink.

It is clear this is no ordinary moment.  Shocked and amazed by what he has just experienced, Simon Peter’s response to being in the presence of the Holy is to beg Jesus to leave him, for he knows that he is not worthy.  Yet the good news for Simon Peter, and for us, is that his lack of holiness does not disqualify him.   For the same power that brought him to his knees now lifts him and the other fishermen up.  “Do not be afraid,” Jesus says to them, “from now on you will be catching people.”

In the end, Peter and his companions leave everything to follow Jesus. Their lives will never be the same. They have no idea where this journey will lead. They only know that, if Jesus isn’t worth following, then nobody is!

Video: For further discussion on the sheer grace of being called to follow Jesus, watch Rob Bell’s short video, Dust (Nooma series).  Though not specifically about this passage, he presents a great take on what being called by a rabbi to “follow me” meant in Jesus’ day, and how Jesus’ invitation to Peter, James, John, and the rest would have been most unusual.  Talk together about what it means that Jesus calls us to be his followers.  What does it mean to you that Jesus believes in you?  Does this change the way you see yourself as a disciple?

Remember Your Baptism: As part of your concluding prayer this session, invite participants to remember their baptisms as a connection to the calling we receive to be followers and disciples of Jesus.  This could be as simple as having a small bowl of water in which you invite them to dip a finger and make the sign of the cross on their own forehead.  Or perhaps have them bless one another.  Especially instructive are these words from Evangelical Lutheran  Worship (pg. 227) with which the presiding minister addresses the assembly during a baptism:

In baptism our gracious heavenly Father frees us from sin and death by joining us to the death and resurrection of our Lord Jesus Christ.  We are born children of a fallen humanity; by water and the Holy Spirit we are reborn children of God and made members of the church, the body of Christ.  Living with Christ and in the communion of saints, we grow in faith, love, and obedience to the will of God.

Gracious and loving God, before we could even think to seek you, you have come seeking us. As your Son was revealed to Simon Peter and the others through a miraculous catch of fish, help us to see the many ways that you act in our lives, and to praise you for the grace that you give to us day by day.  Empower us by your Spirit to follow, lead us to be living signs of your love, and give us the courage to invite others.  In Jesus’ name we pray.  Amen